AC Milan are preparing to open talks about a new deal with Portugal forward Rafael Leao and would like to get a deal sorted before the World Cup. Chelsea have been linked with the 23-year-old and are following the situation closely. (La Gazzetta dello Sport, via Football Italia)

Chelsea are close to a deal to appoint Southampton’s head of senior recruitment Joe Shields as their director of recruitment. (Guardian)

Manchester City have told a number of clubs – including Bayern Munich and Inter Milan – who have enquired about Dutch defender Nathan Ake that they will not be selling the 27-year-old in January. (90 Min)

Manchester United have reportedly “intensified” their scouting of Benfica goalkeeper Odysseas Vlachodimos and are keen to sign the 28-year-old Greece international, who is also a target for Leicester City. (Sportime – in Greek)

Brentford have opened talks about a new contract with 26-year-old England striker Ivan Toney, who has been linked with Tottenham. (Football Insider)

Wolverhampton Wanderers are in advanced negotiations with former Olympiakos boss Pedro Martins, who recently failed to agree a deal to become Hull City boss, as the Molineux club look to appoint a successor to the sacked Bruno Lage. (Maisfutebol)

Chelsea and England right-back Reece James, 22, are both hopeful that the knee injury he suffered is not too serious following an initial assessment. (Telegraph – subscription required) 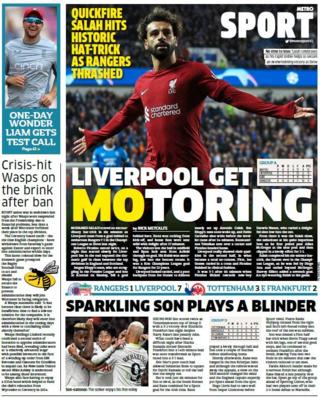 The back page of the Metro