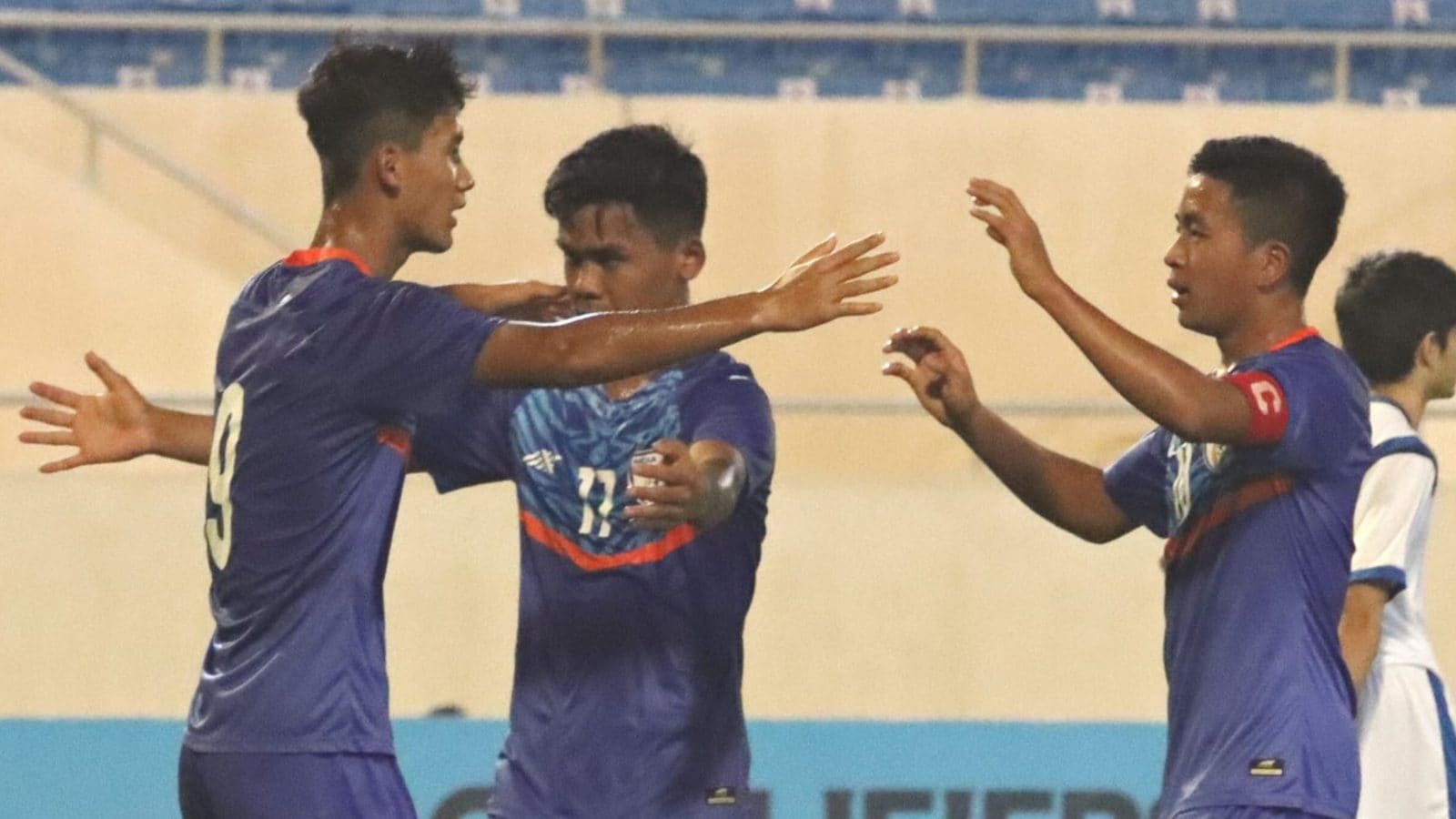 India picked up a crucial win in their AFC U-17 Asian Cup 2023 Qualifiers campaign defeating Kuwait 3-0 in a thrilling encounter at the Prince Saud Bin Jalawi Stadium here on Thursday.

With this win, India continue their perfect start to the competition, having registered a commanding 5-0 win against the Maldives in the previous match. Two goals from Thanglalsoun Gangte, on either side of Korou Singh’s second-half strike, gave the Indian side three points. Goalkeeper Sahil also shone through with a notable display, making a number of crucial saves and ensuring a hard-earned clean sheet.

The first half began with the Indian side in the ascendancy right from kick-off. The first big chance came in the ninth minute as Gangte headed the ball into the net from a corner-kick opportunity. However, the referee had blown for a foul in the build-up.

Three minutes later, skipper Vanlalpeka Guite stung the palms of the Kuwait custodian with a low, fizzing shot that was saved. The pressure continued to build and the reward came in the 16th minute as Bibiano Fernandes’ side took the lead.

A delicious long ball from centreback Manjot Singh Dhami found Korou in space down the right flank. The winger expertly charged towards the by-line and played a pinpoint cross for the onrushing Gangte, who provided a clinical first-time finish.

The Indian side could have extended its advantage at the half-hour mark as Lalpekhlua found himself free inside the penalty area after a well-worked corner-kick routine but his shot at the near post was blocked at the last moment.

India custodian Sahil was called into action on a couple of occasions and produced some fine saves towards the end of the first half to ensure a clean sheet. In the 24th minute, he did well to dive sharply and stop a shot from Ahmad Boodai, before making another good save in the 40th minute.

A critical moment came in first-half stoppage time as Sahil first made another block to keep Boodai’s shot out and followed it up with a top-notch save moments later after Khaled Alkharqawi fired in a powerful effort from close range.

After the half-time interval, the game continued from where it left off as both sides continued to push for advantage.

In the 48th minute, Korou received the ball in space and beat his marker but lost his footing at the key moment and his shot was blocked. Eight minutes later, Lalpekhlua had a great chance to measure his shot from inside the penalty area but his curling effort was wide of the mark.

Two minutes after the hour mark, Korou headed narrowly over the bar from a corner-kick chance. However, four minutes later, he was on hand to double India’s advantage as the Blue Colts raced forward on a counter-attack. Guite fired in an inviting low cross from the left and the winger slammed it home with aplomb.

Sahil was called into action yet again in the 69th minute, producing a flying save to deny Khaled once again. The stop proved to be crucial as the Indian team struck another telling blow just two minutes later as Gangte scored his second. India poured forward on the break again and Lalpekhlua delivered a fine cross from the left flank as Gangte slid home a clinical finish.

India ended the game on a high note, creating a flurry of opportunities and testing the Kuwait custodian, as the referee blew the final whistle with the score at 3-0. In the next match, the Indian side will go up against neighbours Myanmar at the same venue on Friday (October 7, 2022) at 8.45 PM IST.