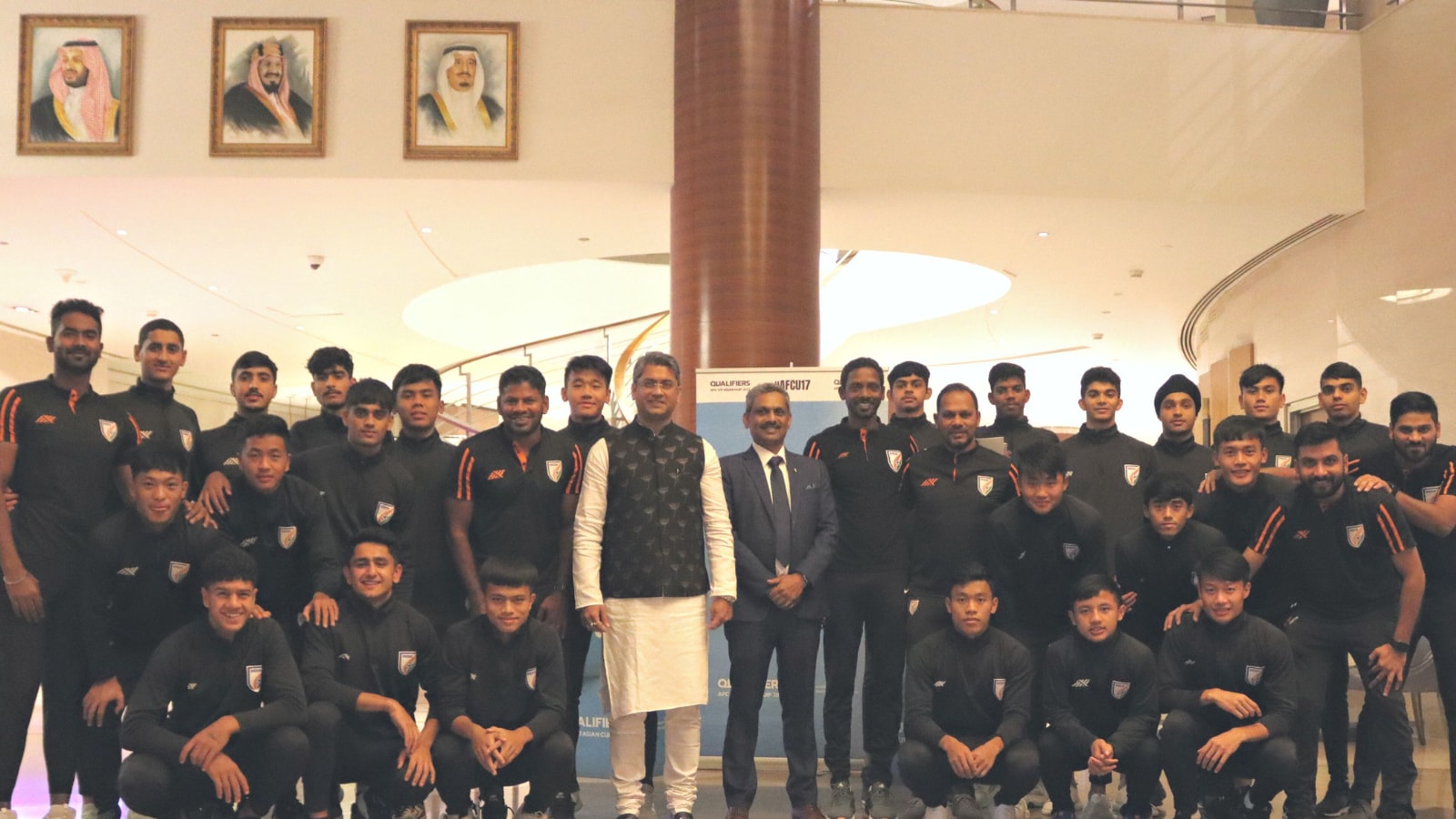 AIFF president Kalyan Chaubey and secretary general Shaji Prabhakaran met with the India U-17 Men’s side at the team hotel in Al Khobar, Saudi Arabia on Thursday, October 6, 2022.

Both the president and the Secretary General congratulated the U-17 side on their winning start to the AFC U-17 Asian Cup 2023 Qualifiers, where they earned victories against the Maldives (5-0) and Kuwait (3-0).

“I would like to congratulate each and every one of you from the bottom of my heart for the performances that you all have put in over the last two matches,” said Kalyan Chaubey. “I can assure you that you have made the whole country proud.”

Shaji Prabhakaran said, “Very happy to meet all of you. I saw your games, and it was very good – keep it up. You boys keep giving it the best you have, and we, from the Federation’s end, will try to give you whatever support you need.”

The duo took the time to get acquainted with each and every member of the squad, before the president informed them of his plans for the team in the coming years, where as per a new Memorandum of Understanding between the AIFF and the Saudi Arabia Football Federation, the U17s will play two 3-nation tournaments a year as they progress through the age groups.

“We are happy to inform all of you that we came here to Saudi Arabia to sign an MoU with the SAFF, as per which you boys will get to play more international matches every year for the next four years,” said Kalyan Chaubey.

“We believe that until and unless you play more games, you will not get to improve as much. You boys are now at the U-17 stage. As and when you progress through the age groups, you will keep playing three-nation tournaments with countries like Saudi Arabia, Oman, Bahrain, Kuwait, and so on. It is when you play these teams across different age groups that you win some, you draw some and you lose some, and then you can reflect on the areas you can get better,” he said.

“We have seen that India can compete with the best in Asia at the age group levels, but when the same players go to senior football, they struggle. We want to bridge that gap. If you boys keep playing some of these series with around 10-12 matches every year, that will only help you improve. sure, you may make mistakes, but it is our hope that you will learn from them, and when it comes to the more important matches, you all will take to the field as much improved footballers,” said Kalyan Chaubey.

The president pledged full support to the team and its players for the next four years.

“In the next four years, the AIFF will give you full support in terms of nutrition, equipment, and research. By the time you boys are 22-23 years old, we hope that you can be the Asian Champions. If not the Asian Champions, then the top four at least. That’s when we will get to improve. We have a lot of hopes for you boys,” he said.

The president also urged the players to envision a future where Indian players frequently go to foreign clubs to play football.

“We want you to be able to go ahead and play for foreign clubs in the future. You can play at least 3-4 years there, and come back and play for the National Team a much improved player,” he said. “If there are multiple of you doing this, the quality of the national team will automatically improve.” 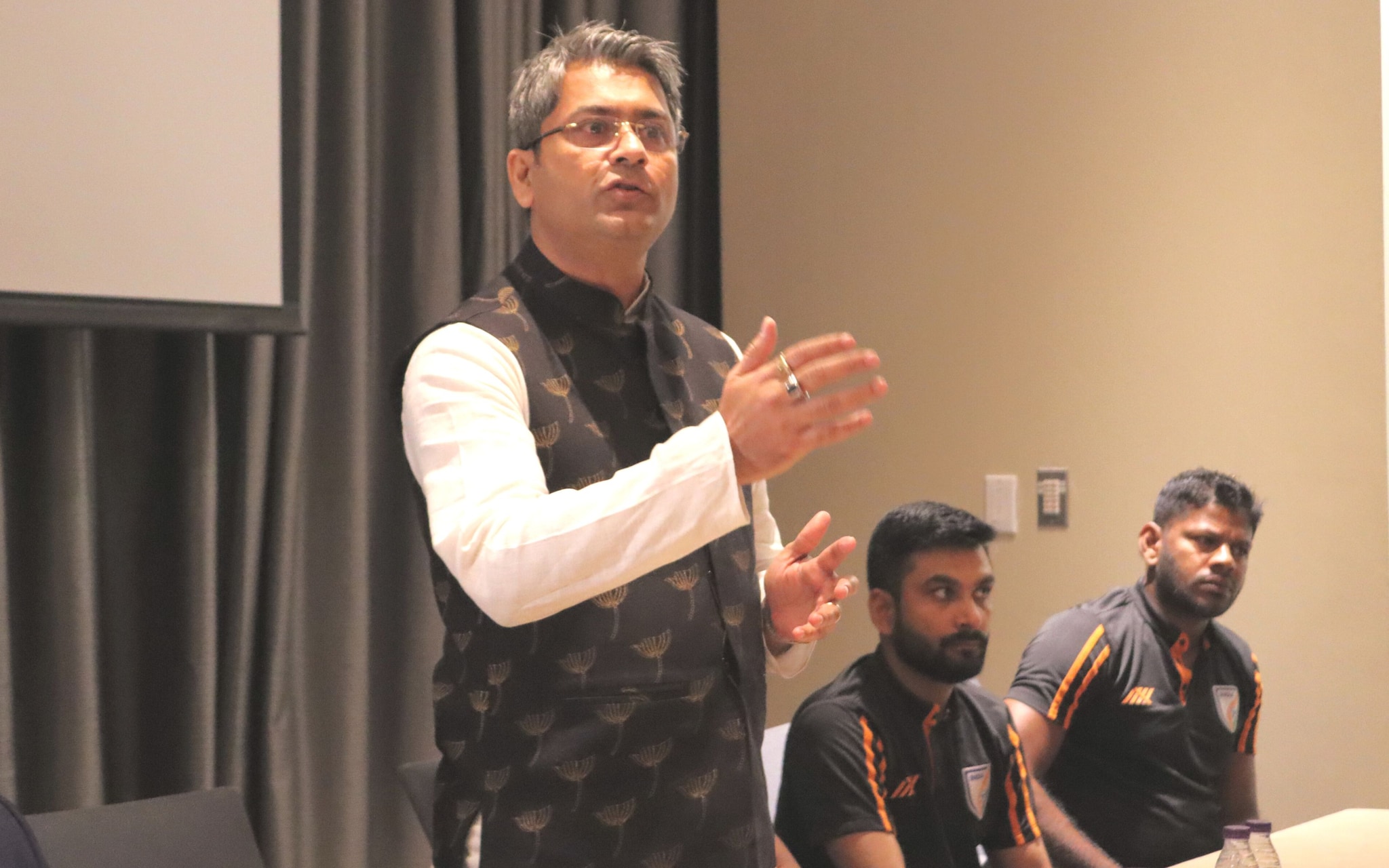 Kalyan Chaubey also revealed visions of a Santosh Trophy being played on a much grander scale than ever seen before.

“We also want you to go ahead and play prestigious tournaments like the Santosh Trophy, and we will try to make it an illustrious event in the future,” he said. “Just like they do in cricket, we are looking at options where we can host the tournament in other countries, and make it a much more glamorous event.”

He further continued, “The Federation is thinking in a new manner, and we are looking to give our full time and effort to Indian Football. Whatever you as players need from us, we want to provide them to you. And from our side, it is our hope that when we work hard for all of you, you boys carry yourselves with utmost honesty and sincerity, and not be carried away by distractions.

“Take Sunil Chhetri for example. Why do you think he is able to play even at this age? It’s all because of his hard work and dedication that he’s gone so far. You must think about it. Can we work as hard as him, with the same dedication? We all have it within ourselves. Every day, we are in competition with ourselves, not with others. If we win against ourselves, then we are winners every day, and we will go ahead.