Celtic’s hopes of Champions League progress are over after their profligacy was punished in a frustrating home defeat by RB Leipzig.

Matt O’Riley and Greg Taylor struck the woodwork in quick succession and Daizen Maeda and Kyogo Furuhashi also passed up glaring chances for the opener.

It leaves the Scottish champions bottom with one point from four games.

But while a top-two finish is now beyond Celtic, their hopes of salvaging a Europa League place were boosted by Real Madrid’s late equaliser away to Shakhtar Donetsk, who are now four points ahead in third and visit Glasgow in a fortnight.

Celtic’s group-stage failings were encapsulated in a dizzying sequence midway through the first half. O’Riley rattled the base of a post with a 20-yard strike and Taylor pounced on the loose ball only to scuff it on to the bar with the goal at his mercy.

Maeda had set the tone of frustration in the opening seconds, scooping an awkward header inches over, and wasteful finishing is ultimately what has condemned Celtic to an exit with two games to spare. 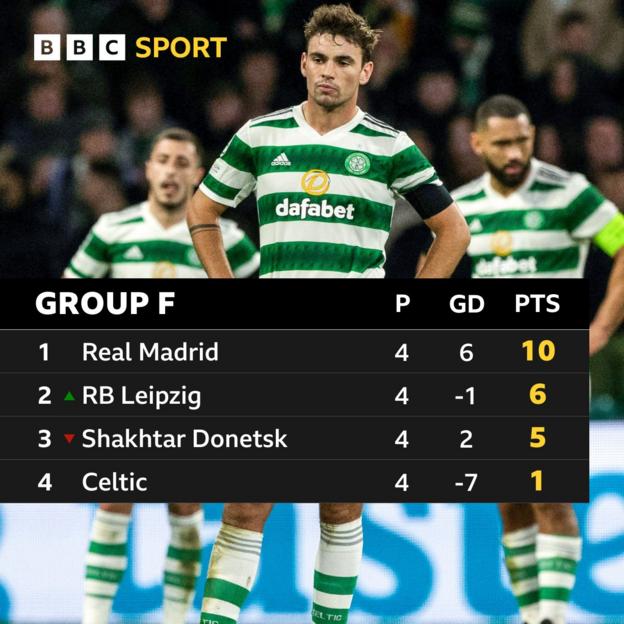 They were eventually undone by a slick Leipzig outfit that had found Joe Hart in imposing form. The Celtic goalkeeper, who gifted a goal in last week’s defeat in Germany, stuck out a leg to brilliantly divert Christopher Nkunku’s powerful drive past a post then spread himself to foil Willi Orban.

Celtic looked increasingly ragged as the second half swung from end to end and the only surprise was how long it took for a goal to arrive. Leipzig full-back Mohamed Simakan blazed over at one end, Maeda volleyed Aaron Mooy’s cross wide at the other.

But Leipzig’s growing menace was rewarded when Werner guided a header from Andre Silva’s drilled cross into the bottom corner.

But Leipzig put the result beyond doubt when Werner rolled a pass to Forsberg, who took a touch then sent an unerring finish into the top corner.

Player of the match – Timo Werner

A night that promised much for Celtic ends with a familiar pang of regret over missed chances and an unwanted Champions League record.

The Glasgow club have now equalled Monaco’s mark of having lost seven consecutive home games in the group stage, a barren run stretching back to 2016.

Deprived of captain Callum McGregor through injury, Ange Postecoglou doubled down on his attacking philosophy and O’Riley impressed in a deeper midfield role that he’s accustomed to. Left-back Taylor, too, shone as the hosts gave as good as they got for much of this contest.

The stats, though, are galling. Celtic racked up 16 shots, just two of them on target, and their XG (expected goals) of 1.75 amplifies their struggles to put the ball in the net. It became inevitable that Leipzig would not be so generous at the other end.

It leaves Celtic needing to win at home against Shakhtar and take a least a point in Madrid against an already-qualified Real to secure the consolation of Europa League football.

What the manager said

Celtic boss Ange Postecoglou: “Disappointed for our fans, and for our lads as well. I thought we showed the endeavour to win the game, but as we’ve found out at this level if you don’t take your chances, it’s very hard to convert that into a result.

“It’s been the story of our campaign so far, a tale of missed opportunities. It’s the hardest part of the game, it’s why clubs spend hundreds of millions on players who do that.”

Celtic host Hibernian in the Scottish Premiership on Saturday (15:00 GMT), the first of three domestic outings before their next Champions League assignment at home to Shakhtar on 25 October (20:00).