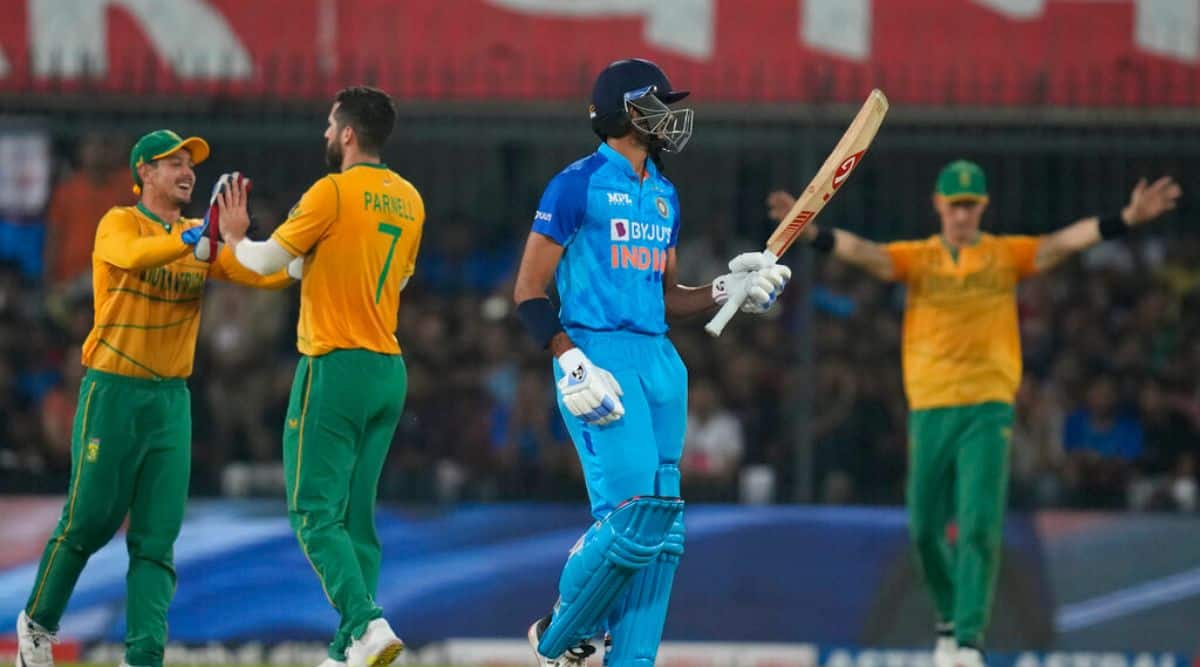 The bromance between Rohit Sharma and Dinesh Karthik has been the side-talk of the series. Rohit has kissed the forehead, mock-strangled, muttered in ears, and today, at the end of the final T20, he added a friendly punch to the meme-miners. At the end of the game, as India lost their last wicket, Karthik shuffled out of the dug out, clapping his hands, and there was who else but Rohit, who punched him with a smile. Earlier, he muttered and shook his head when Karthik lost his wicket to a reverse-switch lap shot; perhaps that punch was about that dismissal.

Karthik had looked good for a lot more and was in need for a longer stay in the middle ahead of the T20 World Cup but that was not to be. South Africa ended the series well and will look back at Gauhati as a rare off-day with the ball and will consider the first game as one of those days when they were blindsided by the swinging ball. Their top order positions, especially with Temba Bavuma’s form remains a concern but other stuff is slowly falling in place. India’s search for a death-overs bowler continues.

A dash of laughter does not hurt after the series win! ☺️#TeamIndia captain @ImRo45 & @DineshKarthik share a lighter moment. 👍#INDvSA pic.twitter.com/8WcTjcpOSF

There were the usual free-flowing pick-up shots behind square off pacers, a wondrous reverse-lapped six off R Ashwin but the Quinton de Kock shot that stood out was a smart tap through vacant slips for four. It was the last ball of the 7th over, a slower cutter from half-way down the track, the slowish bouncer, and for a while it seemed de Kock had set himself for the leg-side swing. But at the last instant, he sort of held himself back from letting go, and showed a great awareness about the fields set and great skill-set, he tapped the ball well to the right of short third man for a four. From checking what seemed a pre-determined big hit to a delectable late-cut of sorts, it was quite a stunner.

Back to back fifties for Quinton de Kock 👏#INDvSA | 📝 Scorecard: https://t.co/Za8J5e3abK pic.twitter.com/b1C4lPOYAn

In the 16th over, the bowler Deepak Chahar had the opportunity to run out Tristian Stubbs at the non-striker’s end but he didn’t take it. The mode of dismissal was in news recently, when Deepti Sharma ran out Charlie Dean legitimately recently. Stubbs had slipped out before the ball was delivered and Chahar pulled out. He did a mock underhand throw at the stumps and flashed a smile at Stubbs who rushed back into the crease. Chahar smiled, Rohit Sharma smiled and finally a sheepish smile spread across Stubbs’ face.

India back on death over shot clock after Chahar concedes 24

They talked up Deepak Chahar after one of the end overs in the last game, as a possible candidate to plug runs in that phase. Rilee Rossouw slammed a six and a four, of full balls in the 16th over. Then Chahar got another go at the final over. 24 runs flooded in as David Miller walloped his length deliveries for two sixes and a high full toss for another one. His first ball was sprayed way wide. India now back to the drawing board, scratching their head to find a bowler good enough for the end overs. They have three ODIs (why are they playing ODIs before a T20 world cup!? England and Pakistan showed the way with a 7-game T20I series) to figure out a pacer who can bowl at the death.

Last audition for those on the bench

The series had been decided, the World Cup was round the corner and India was looking to give everyone match time. So when Rohit Sharma got out in the second over of the game, the ones warming the bench for long got their chance to be on the central square. Suryakumar Yadav the hero of the series too was dropped down the order as the final game of the series turned into an audition of sorts. Rishabh Pant, Shreyas Iyer and Dinesh Karthik finally had their time under the floodlights. However, the same was true for the South Africans who too had Australia on their minds. They too wanted to make an impact, they also wanted every outing of theirs to count. Wayne Parnell tested Iyer with short balls, as was expected and the Mumbai batter didn’t last long. Iyer is in reserves for the World Cup but he needs to quickly get rid of the tag of a batsman who can’t handle bounce.

Dinesh Karthik had hit a flurry of boundaries to reach 46 from 21 balls when he went for a reverse-switch hit off Keshav Maharaj and was bowled. In the dug-out, Rohit Sharma shook his head and muttered away as if he were driving his car, upset about a two-wheeler’s antics. On air, Sunil Gavaskar was more understanding of the shot, saying how DK usually plays that to great success. The brief cameo from Rishabh Pant, where he took on Lungi Ngidi in the 5th over with two sixes and two fours, had given India a hint about how things could have been had India been properly experimental in their experimental phase, instead of being conservative. They could have used him as an opener and had a proper in-form alternative.

Talk about a quick-fire knock.

Rishabh Pant played an inning that would have given the Indian team management a tantalising opening option and a traumatic migraine. Pundits have repeatedly insisted that the ideal Rohit Sharma partner should be a good-old pinch hitter – a hard-hitter who can disturb the bowling plans and take care of the run rate. Such batters give Rohit time to settle and get into the zone where he is simply unstoppable. While the management insists that Virat Kohli is a stand-in opener, Pant fits the bill more. The very eventful Lungi Ngidi over where Pant scored 20 runs and got out on the final ball showed that the wicket-keeper could be the perfect foil to the captain at the top of the order. The T20 opener India never had. Early in the over Pant tried to play a cross batted slog to square but he missed the ball and was hit on the thigh. That’s not what you play against the new ball. But he got his opening act together soon.

The other shots were a couple of immaculate straight drives that went for four. There was a perfect lofted six to long on also – it was the kind where batters pose for the extra few seconds to show their textbook elbow position. There was also a cut of a short ball that brought to mind two other Delhi openers – Shikhar Dhawan and Virender Sehwag. Pant for opener – a signature campaign for Pant as opener might have started somewhere in Delhi.

Why was Quinton running?

A proper comedy of errors ensued when Harshal Patel shovelled a dolly of a catch to short midwicket where Dwaine Pretorius put it down. Harshal ran for some reason, reminding one of Javagal Srinath who used to run helter skelter in his time. But so did the wicketkeeper Quinton de Kock, who pulled off his gloves and ran towards Pretorius. The on-air comms thought he was out to celebrate the catch but perhaps he ran to gather the ball that had slipped away from Pretorius. Whatever be the reason, he was out of position when Pretorius scrambled after the ball and threw at the striker’s end. Harshal, sent back by Axar Patel, had stumbled and fallen. But Pretorious in his hurry hadn’t seen all that. He had thrown the ball assuming de Kock would be behind the stumps. Instead the wicket-keeper was well away from his station and what’s more was in direct path to the stumps. And there was anguish all over with Pretorius pointing his arms at the stumps and silently imploring de Kock : why weren’t you there where you were supposed to be?