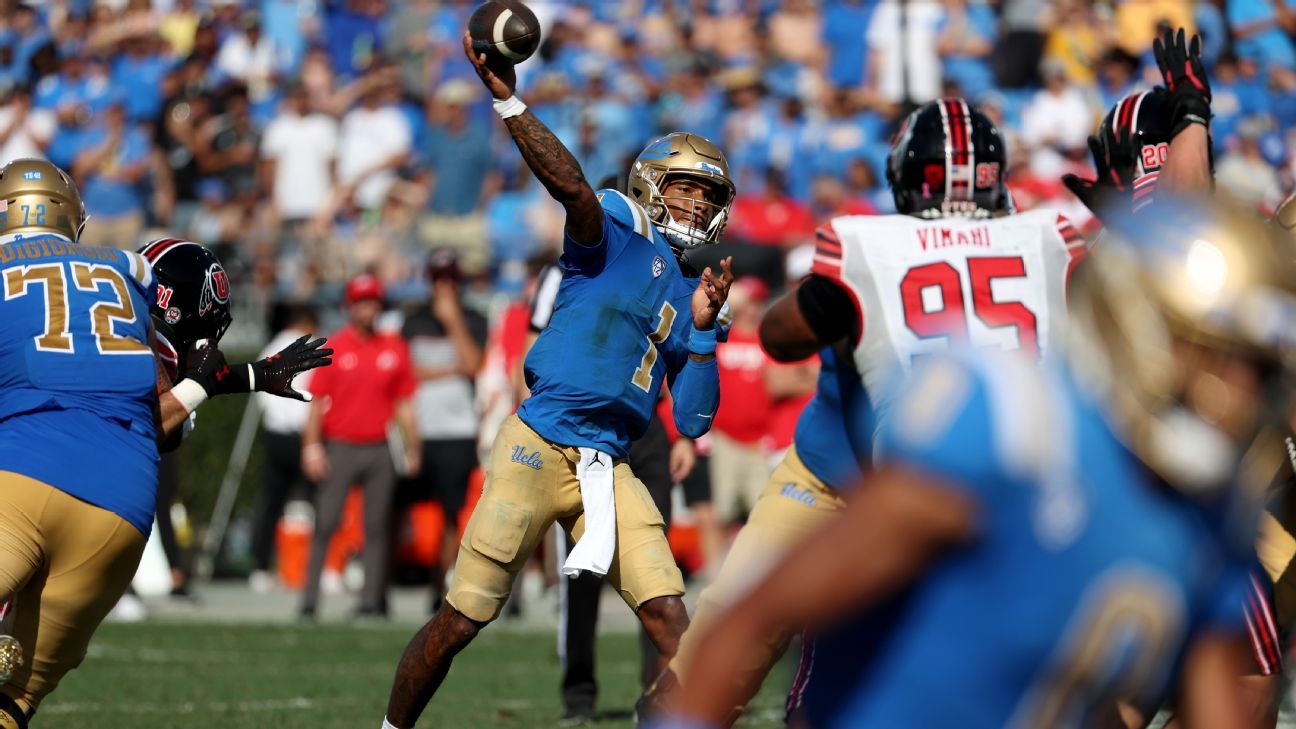 PASADENA, CA. — For the second week in a row, UCLA quarterback Dorian Thompson-Robinson and head coach Chip Kelly walked off the Rose Bowl field in celebration, this time after upsetting no. 11 Utah 42-32 to go 6-0 for the first time since 2005.

For Kelly, it was smiles and handshakes with friends and UCLA alumni, while for Thompson-Robinson, it was a simple phrase that may or may not have had a few expletives.

“This is our house,” Thompson-Robinson said postgame when asked to divulge a PG version of his celebration.

Twice in the past nine days, the Bruins have been the underdogs at home, welcoming ranked teams coming off huge wins. Their response has been nothing short of impressive and surprising, at least for those who have been witness to the struggles of the Kelly era in Westwood. In the span of two games, Kelly and Co. have validated the process he preaches and turned the country’s eyes toward the fact UCLA looks like a bonafide contender.

“They come to work every single day, and it is paying off for them on Saturdays,” Kelly said. “It’s really cool to watch that. You see it kind of morph in front of your face. It’s really cool.”

No one player’s evolution and maturation has been more exhilarating to watch than Thompson-Robinson’s. The fifth-year senior followed up his potent performance over Washington last week with a decisive and dominant game on Saturday. He passed for 299 yards and four touchdowns, including his school record 76th touchdown, and tacked on a rushing touchdown.

“It’s great to have my name there, but I think the thing that’s made me the most emotional right now is seeing how happy my guys in my locker room were for me,” Thompson-Robinson said. “The coaching staff, everybody that’s been here since I was a freshman, just re-thinking all the hard times I went through. All the bickering back-and-forth, the transitioning going on throughout the program, again I just can’t say how thankful I am and how grateful I am to be on this team right now.”

After Thompson-Robinson’s 315-yard, three-touchdown performance against Washington on Friday, Utah came prepared to limit him, allowing UCLA’s run game to key the upset. Running back Zach Charbonnet ran for 198 yards on Saturday, and still, Thompson-Robinson had his way in the air, averaging more than 16 yards per completion.

“It’s pretty cool what Dorian has done, the work that he has put in,” Kelly said. “He has invested a ton in himself and he’s reaping the rewards of that. … I think he should be in the talk as one of the better players in the country.”

Led by Thompson-Robinson — who has said multiple times that being overlooked by the media, fans and the sport as a whole has motivated him as well as the team — the Bruins have relished their underdog role and handled both Utah and Washington in dominant fashion. It’s a stark contrast to how Kelly’s first two seasons (7-17) went.

“We had to go through that to get to where we are right now,” said defensive back Mo Osling III about the program’s last few years. “I just feel like it was part of the process.”

The victory over Utah not only takes the Bruins to 6-0 for the first time in 17 years, it also gives them their first win over a team ranked no. 11 or better in the Kelly era. Now, Kelly’s offense – which was his calling card at Oregon – has scored 30 points or more in 9 straight games, the longest streak in school history.

“It’s not about attention,” Kelly said in regards to UCLA being overlooked nationally. “The thing that makes me so happy is our players have embraced the process and that’s the joy.”

Kelly’s good mood was evident Saturday, as his friends and guests watched him take questions, of which he welcomed more than usual. However, he balked at the notion that UCLA has gotten “markedly” better since last season and even through this season as they struggled to beat South Alabama in the third game of the season, saying instead that he’s seen incremental improvement each week as the team has bought into the process. He’s not the only one.

“They’re athletic, fast, they have a lot of length, so, they were as advertised,” Utah head coach Kyle Whittingham said.

UCLA will now ride this high into a bye week before heading to Eugene in two weeks to face another highly-ranked team in Oregon. By then though, the Bruins will not just be ranked, but could be closer to the top-10 in the country. To hear Thompson-Robinson talk about it though, that may not be enough.