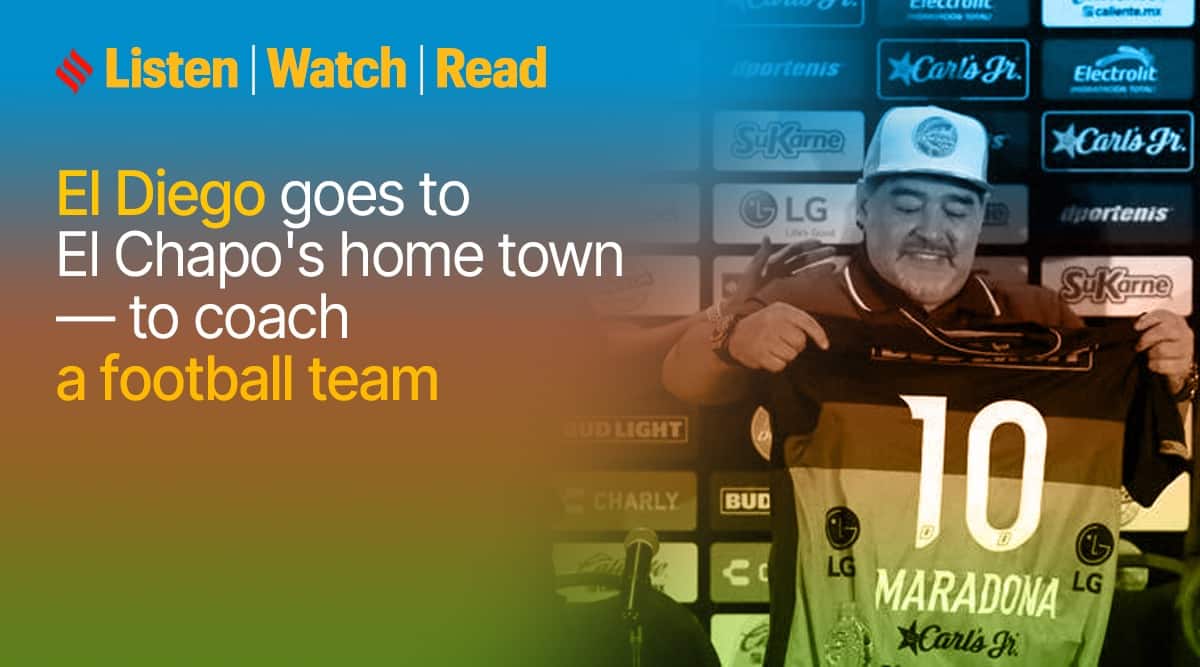 Sport in the multiverse works in different dimensions, beyond Live Action. It is heard and seen and pored over in retellings by wordsmiths. The Express Sports team picks out the best podcasts, docus, OTT series and book recommendations for sports lovers, every week in LWR – Listen Watch Read

The move had all the makings of a disaster— a man with a weakness for cocaine moving to Culiacan, the stronghold of the infamous Sinaloa cartel and drug lord El Chapo. In 2018, arguably the greatest of footballers Diego Maradona lands up in Culiacan to coach the bottom-runners of the second division Dorados de Sinaloa.

“I start imagining him here…The most recent news about Diego was the fuss at the World Cup. (two-finger salute, scary-eyes skyward celebrations) For 30 seconds my mind went on an intergalactic journey. Then I replied, if there is a club president with the courage to take him on then it is me,” is how José Antonio Núñez describes his thoughts during a call with Maradona’s lawyer.

Man City manager Pep Guardiola makes a brief appearance. Towards the end of his career, he played for Dorados for six months. “There was just one shower and no luxuries,” Guardiola says adding he enjoyed his stint in the Mexican city.

Maradona on a video call before reaching Culiacan says “President, here I come. The Maradona revolution begins. I want you beside me.”

Diego Maradona as the new manager of the Dorados of Sinaloa, in Culiacan, Mexico, Monday, Sept. 10, 2018. (AP Photo/FILE)

For an area known for cartel wars and drug-related violence, Maradona’s arrival was a chance to uplift its image and that of a football team. And Maradona, limping and wobbling because of arthritis of the knees, does transform the team by taking them to two playoff finals. They lost both but for the fans and the players having the footballing God on their side was worth the ride.

One player describes how Maradona got them to forget the fear of failure. “Let them blame me if we don’t get the results. I know you love to play football so enjoy it,” Maradona’s message unshackled their playing style.

This seven-part limited series has great locker room footage of an emotional Maradona, swearing, shouting, dancing and celebrating. In one of the playoff finals, he was sent off by the referee for stepping into the technical area of the rivals. A distraught Maradona is seen watching the game on television from inside the stadium. He then explodes.

“San Luis coach told me to shut up. Really? Do you know how many games I have played? And you? You have to show your ID to get into your own house, son of a b****.”

Yet this is not only about fury and anger but of a lion in winter having a whale of a time, even if it stresses him out sometimes. He steps out of the stadium in one game because he can’t bear to watch the final tense minutes. When a support staff informs him the team has won, Maradona breaks into a child-like celebration.

There are touching moments of the team celebrating Maradona’s birthday with a cake and the Argentine hero getting emotional. “I have found people who understand me,” he says at one point. A team physio massaging Maradona’s worn-out knees, a Maradona who finds trouble walking but doing tricks with the ball and one scene where he needs a crutch to walk is in stark contrast to footage of the Argentine great at his peak.

Maradona eventually ends his stint with Dorados for health reasons but unlike his departure from Napoli which turned bitter, this one ends on a good note.

“Ask for marijuana and you will get it,” goes one unofficial fan song that gained popularity as Maradona guided the team to playoff finals from the bottom of the second division. Thankfully for the Dorados faithful, the most potent high for Maradona in Sinaloa was the joy of teaching a team to play unadulterated football.