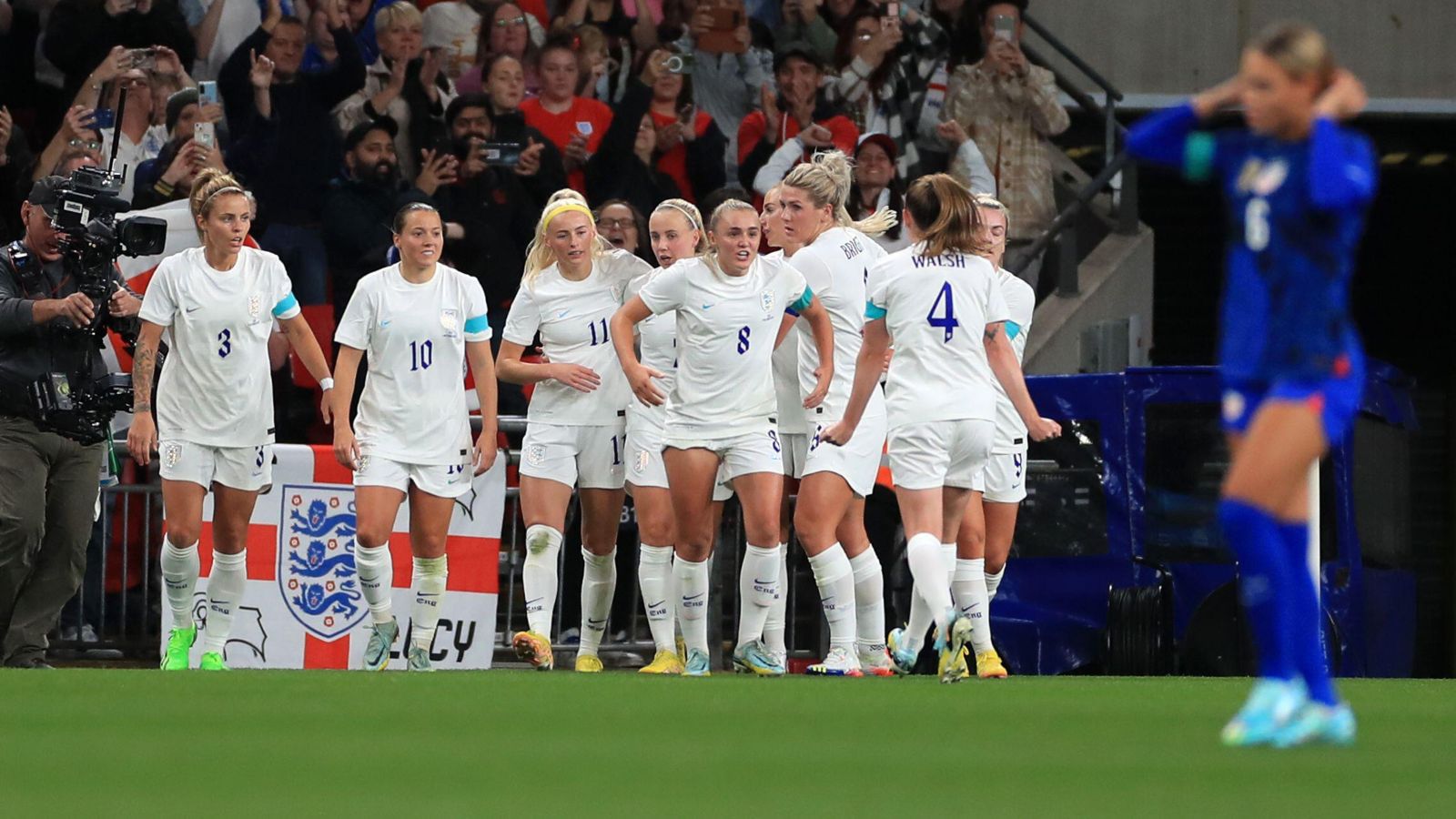 England claimed victory in the clash of European and world champions as Sarina Wiegman’s side beat the United States 2-1 in a friendly at Wembley.

The Lionesses went ahead through Lauren Hemp’s 10th-minute finish before Sophia Smith equalised in the 28th minute after Georgia Stanway lost possession near her own box.

England then benefited from two VAR checks – one resulting in the penalty from which Stanway restored their lead after 33 minutes, and another soon after that saw Trinity Rodman’s strike for the visitors disallowed, with Smith ruled to have been offside.

VAR also ensured a late penalty award against England for handball, with the ball having struck Hemp’s legs, was overturned as they saw out only a third victory in their last 17 meetings with the US.

It is the first time they have beaten the world number ones since 2017 and represents yet another big plus for the team under Wiegman – whose undefeated tenure now shows 21 wins from 23 games – as they work towards next summer’s World Cup in Australia and New Zealand.

A crowd of 76,893 was in attendance for England’s return to the scene of July’s historic Euros triumph, and those present included a host of former Lionesses as the team’s 50th anniversary was marked.

Prior to kick-off, players from the first official England Women match, a 3-2 win over Scotland in Greenock in November 1972, each received a bespoke cap in a presentation in the stadium. They subsequently formed a guard of honour by the tunnel as the teams came out onto the pitch.

England and the United States were wearing teal armbands in what they had said was “a show of unity and common cause…to stand in solidarity with sexual abuse victims”, and together held up a banner reading ‘PROTECT THE PLAYERS’ just before the game started, while the Wembley arch was also lit teal.

The match came four days on from the publication of a report of an independent investigation which said verbal and emotional abuse and sexual misconduct “had become systemic” in the National Women’s Soccer League in America.

After Mary Earps had dealt with an early Smith shot, England – captained by Millie Bright in the absence of the injured Leah Williamson – registered their first effort of the contest with Beth Mead’s fifth-minute strike, caught by Alyssa Naeher.

The hosts then grabbed the lead five minutes later when Mead sent a delivery into the box, Alana Cook misjudged her attempt to intervene and the ball came off her to Hemp, who slotted home from close range.

The US hit back just before the half-hour mark, punishing sloppy England play at the back as Stanway, receiving Bright’s pass, was dispossessed by Lindsey Horan and Smith fired past Earps for 1-1.

Stanway then quickly made amends, putting Wiegman’s side back in front with a penalty awarded via VAR. The spot-kick was given after Hailie Mace’s high boot made contact with Lucy Bronze’s face, German referee Riem Hussein pointing to the spot having watched the incident back on the pitchside monitor.

A chaotic spell continued with the US appearing to equalise three minutes later as Rodman swept in – but another VAR check saw the effort chalked off, Smith adjudged to have been offside in the build-up.

The interval saw former Lionesses take the applause of the crowd on a lap of the pitch, before Smith sent a strike wide of Earps’ post two minutes into the second half.

At the other end Chloe Kelly struck off-target, Bronze drilled into the side-netting, and Stanway broke into the box, only to scuff her shot into the stand.

As the US sought out an equaliser, there was a scare for England with around 10 minutes left as Rose Lavelle’s shot struck Hemp in the box, and Hussein gave a penalty.

But with replays showing the ball clearly hitting Hemp on her lower body, VAR again intervened, and after another trip to the monitor for Hussein, it was confirmed it was not a spot-kick.