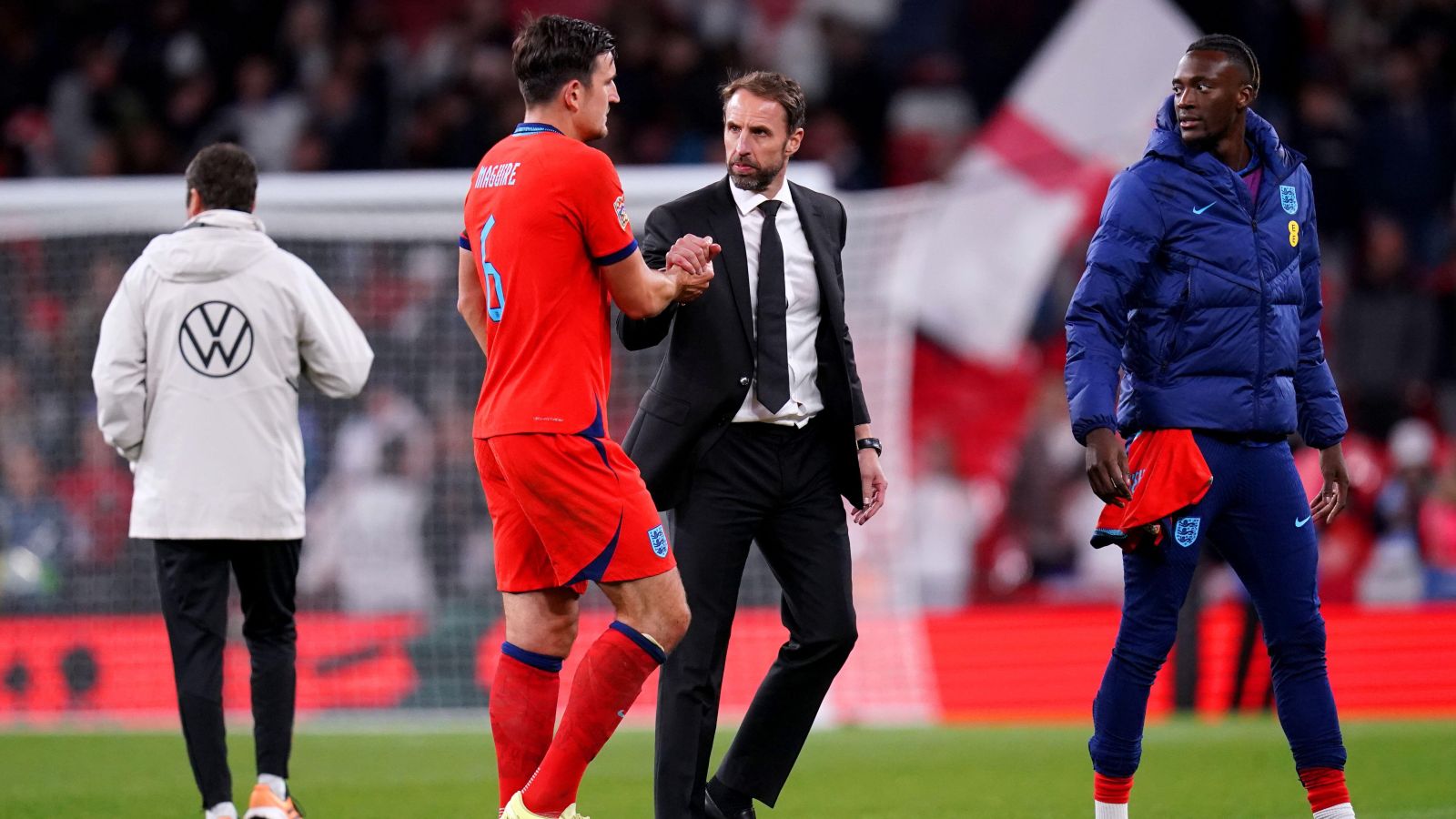 
England boss Gareth Southgate says he would only drop Harry Maguire if it became “almost untenable” to pick the Manchester United captain.

The centre-back has been dropped at club level by new Red Devils boss Erik ten Hag with the centre-back starting just two of their six Premier League matches this season.

But Southgate has showed faith in the 29-year-old over the past week with Maguire starting both of England’s Nations League matches against Italy and Germany.

England 3-3 Germany: Rating the players as the Three Lions whimper then roar

Maguire was guilty of a big mistake to cost England a goal in their 3-3 draw against Germany on Monday night by passing the ball straight to Germany’s Jamal Musiala before bringing him down for a penalty.

But Southgate is still backing Maguire and thinks it’s important to stick with his experienced players ahead of the World Cup in Qatar in November.

When asked about Maguire’s error, Southgate replied: “I know everyone will focus on Harry but there were some very important moments that Harry delivered during the two matches.

“Luke Shaw was another example of somebody [who delivered moments], he’s an outstanding footballer.

“So what do we do? Not pick Luke Shaw because he’s not playing enough football or do we pick a player who can do what we saw tonight?

“That’s always going to raise debate but I think in these moments we’ve got to back our best and our most experienced players unless we’re in a situation where it’s almost untenable and impossible to pick them.”

England found themselves 2-0 down to Germany on 67 minutes but the introduction of Bukayo Saka and Mason Mount turned the game on its head as England went into a 3-2 lead thanks to goals from Shaw, Mount and Harry Kane.

Germany equalised with only a few minutes to go but the late attacking display wille have eased a little bit of the pressure building on Southgate over results and performances.

On the match, Southgate added: “We should really have been ahead with the quality of chances we had at half-time. Second half we started OK. Really all of the goals we conceded are avoidable.

“So, we’re 2-0 (down) looking into a difficult moment but I’ve got to say the players have been fantastic the last few days. They’ve taken some individual responsibility.

“They’ve collectively talked as a group on their own, with us, and the whole experience has been one we needed, I think, to grow the next part as a team because you’re going to have pressure in a World Cup.

“You can try and avoid pressure but it’s coming. Maybe it’s the third group game, maybe it’s a quarter-final – whatever it might be, it’s coming.

“So, better that we feel it and we learn how to deal with it. We talked about how we needed to react if Germany score tonight and the players reacted in the right way.

“We showed some character but also a lot of quality in the chances we created throughout the whole game and particularly for the goals we scored.

“They were quiet, understandably, but they didn’t get on their back and that was so important for us.

“And, of course, we score and the roof nearly lifts off – we all suddenly remember what it feels like to watch a goal go in!

“Then there’s great momentum in the game and I thought Bukayo (Saka) and Mason had really good contributions.

“I thought Jude (Bellingham) was outstanding through the whole game. I think Luke Shaw, considering how little football he’s had, had a really positive night.

“So, a lot to take from it and then of course we get an absolute punch on the nose at the end, which is pretty much how it’s going at the moment, frankly!”