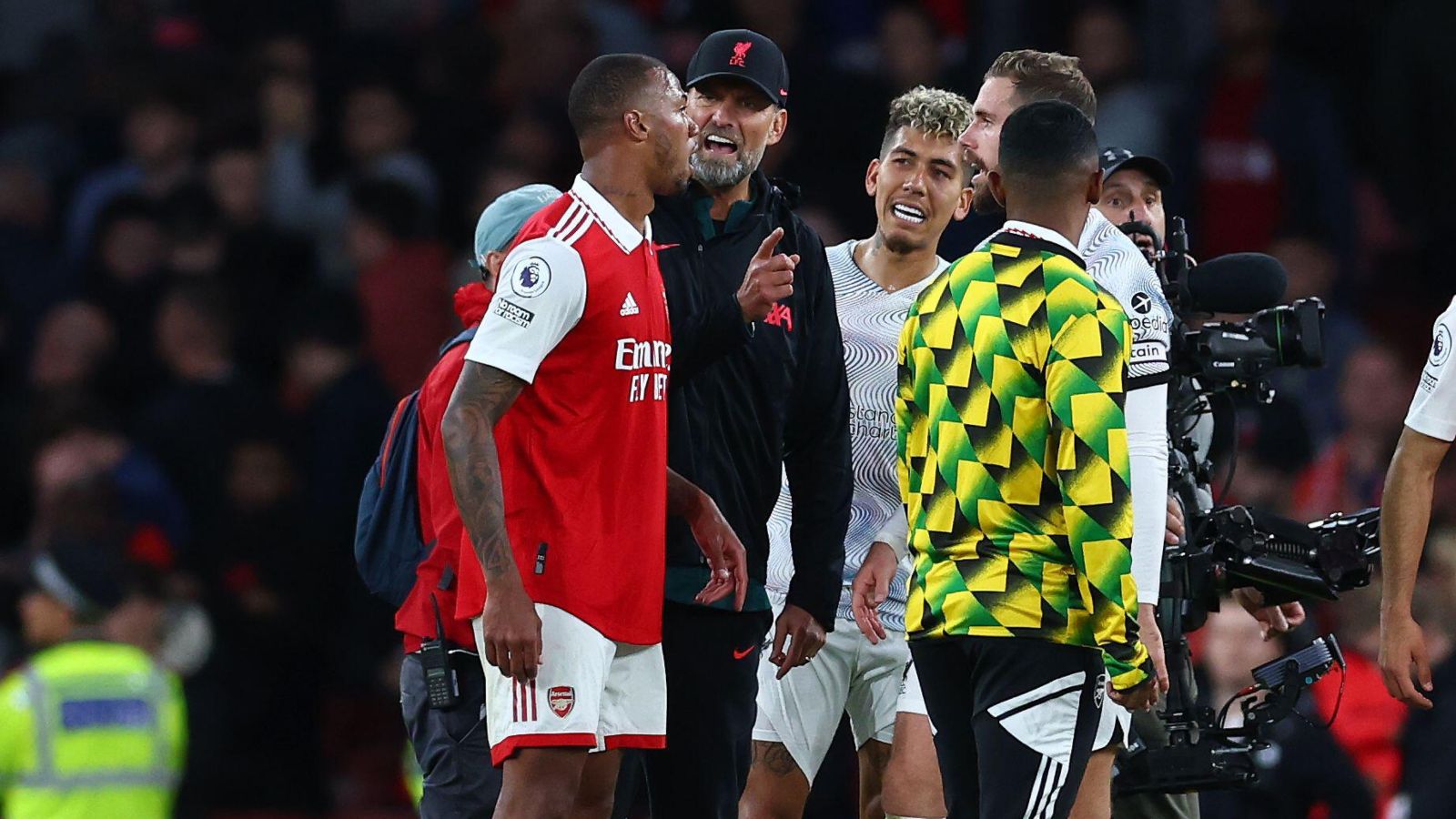 The Football Association have brought in a lip reader to determine what went on in Sunday’s flare up between Arsenal and Liverpool players, according to reports.

English football’s governing body are reviewing footage and details of an incident during the Gunners’ 3-2 victory over the Reds at the weekend.

Gabriel Martinelli’s opener and a brace from Bukayo Saka settled the fixture for Arsenal with Liverpool twice equalising through Darwin Nunez and Roberto Firmino.

The winning goal came when referee Michael Oliver gave a penalty for Thiago Alcantara’s challenge on Gabriel Jesus, which was upheld by VAR despite minimal contact.

That flashpoint saw tempers flare between the Liverpool and Arsenal players with Oliver going to speak to both Jurgen Klopp and Mikel Arteta following the incident.

Speaking to a post-match press conference, Arteta said of the melee: “It was an incident that happened. Whatever happens on that pitch stays on that pitch.”

An FA spokesperson said: “We are aware of an incident that took place during the match between Arsenal and Liverpool. We are in dialogue with the match officials and will review the details of the incident.”

Jordan Henderson and Gabriel Magalhaes were both spoken to afterwards with The Times claiming they were ‘asked for their observations about the incident’.

The report claims that Gabriel is ‘insisting he heard something on the pitch’ and now a ‘lip reader is likely to be employed to try to support the complaint as has happened in previous cases’.

And The Times adds:

‘The FA has said it will review the incident and its usual method is to seek eyewitness accounts from all those players who were involved or nearby.

‘In this situation, that would be almost certain to include Granit Xhaka, Roberto Firmino and the Liverpool goalkeeper Alisson, as well as Gabriel and Henderson.’

In a long read on the Arsenal website Gabriel has revealed that his desire to win silverware with Arsenal and become a Brazil international are driving him on.

Gabriel said: “I’ve learnt so much since I got here and over the last two seasons. I knew about the situation that the club was in when I joined, which wasn’t the best, but ever since first wearing this jersey, I’ve had ambitions – big ambitions.

“I have the desire to win trophies here at Arsenal and leave my mark on a club that welcomed me as much as possible. It’s a club that I love and that my family loves. There are certainly big ambitions here.”

The Arsenal defender, who grew up in Sao Paulo, has revealed that his father was his main inspiration as a kid.

Gabriel added: “I can’t put the importance of my family into words. Thank God, I had a very good education. My parents brought me up well. If I wasn’t doing well, my family was always by my side. If I was doing well, they were also there.

“My inspiration away from football is certainly my father. He battled hard for me to be here today. He’d always wake up early to go to work. He always wanted to get me into football. He’s certainly my inspiration off the pitch. He’s a person who’s always tried to do good things for me.”

READ MORE: Mbappe to Arsenal? Six clubs wantaway PSG star could join with Real Madrid out of the equation