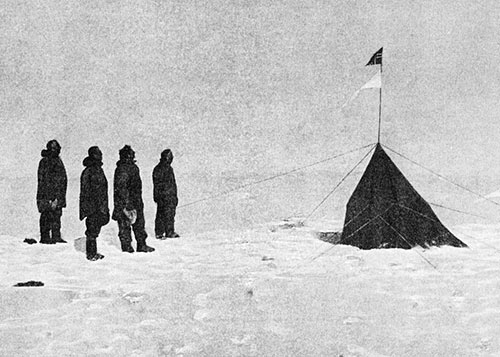 
A list of famous firsts throughout human history. Including famous firsts in exploration, science, transport, politics, sport, culture and the arts.

1492 –  Reach America Christopher Colombus becomes the first European from a major power to land in the Americas (now the Bahamas). Columbus was probably preceded by others, such as the Viking Leif Erikson in the 10th Century.

1498 – 1st European to reach India by sea. In 1498, Vasco de Gama became the first European to successfully sail around the Cape of Good Hope and reach the east coast of India.

Amundsen at the South Pole

1926 – North Pole. – Roald Amundsen (Norway) recognised as being the first person to reach the North Pole.

1783 – Hot air balloon. On Nov. 21 Marquis d’Arlandes and Pilatre de Rozier become the first humans to fly in a hot-air balloon for 20 minutes, in Paris.

508 BC – Democracy – First attempts to introduce concepts of democracy on a significant scale in ancient Greece, e.g.  democratic reforms of Cleisthenes. (see: People who shaped democracy)

1215 – 15 June. Magna Carta. The 1st charter which sought to limit the power of kings by law. Magna Carta established the principle of habeas corpus (see: Key events in history of democracy)

1790 –  1st US Patent Samuel Hopkins became the holder of US Patent #1. He patented a process for making potash and pearl ashes.

1798 – First Vaccine. Edward Jenner developed a vaccine for smallpox which killed around 10% of the UK population. This led to the development of many more vaccines.

1837 – 1st Stamp. Rowland Hill in UK invents a way for people to pre-pay for postage.

1862 – 1st use of Plastic. Alexander Parkes (develops) plastic made from heated cellulose.

1938 – Splitting the atom – Nuclear fission was first discovered by German Otto Hahn. It showed the potential energy which can occur when an element like uranium is split into different elements.

490 BC – 1st Marathon. Greek legend says that Pheidippides, a Greek messenger ran from the battle of Marathon to Athens to declare Greece had won. (and collapsed and died after delivering the message.)

1954 – Sub four-minute mile. 6 May – Roger Bannister (GB) becomes the 1st person to run a mile race in under four minutes (3 minutes 59.4 seconds). He broke the four-minute barrier at Iffley Road, Oxford on the. His time was

1969 – 1000th football goal. 19 November  Pelé scored his 1000th goal in all competitions. Becoming the first and only player to reach that milestone.

2019 – First sub two-hour marathon. Eliud Kipchoge (Kenya) ran the first marathon under two hours in a time of one hour 59 minutes 40 during a special event in Vienna, Austria.

1455 – The Gutenberg Bible was the first major book printed in Europe with movable metal type by Johannes Gutenberg.

1927 – Talking picture. Al Jolson is the main star of the first talking movie – “The Jazz Singer.”

2007 – Smartphone. Apple launch first iPhone, a device that changes the way people use computers and phones.

1817 – 1st prototype of a bicycle. Karl von Drais (Germany) builds the first ‘wooden horse’ a prototype for the modern bicycle (though there were no pedals on this wooden horse)

1969 – 1st to Land on the Moon. Neil Armstrong and Buzz Aldrin become first men to walk on the moon as part of the Apollo moon landing programme

1849 – 1st Female Doctor in US. Elizabeth Blackwell – 1st woman to receive a medical degree in US. (from the Medical Institution of Geneva, N.Y.)

1865 – 1st UK female doctor Elizabeth Garrett Anderson (1836 – 1917) – Britain’s first qualified female doctor. She passed the medical exam and obtained a licence (LSA) from the Society of Apothecaries. She set up her own medical practice. In 1873 was the first women to be admitted to the British Medical Association (BMA)

1869 – 1st Female Lawyer (US) Arabella Mansfield (US) 1st American woman lawyer. A year later, Ada H. Kepley, of Illinois, graduates from the Union College of Law in Chicago. She is the first woman lawyer to graduate from a law school.

1306, 1st laws to protect from pollution. the English king Edward I passed laws limiting coal burning in London due to smog and pollution.

1780 1st philosophical defence of environment. Jeremy Benthum, wrote An Introduction to Principles of Morals and Legislation which was first major philosophic argument in defense of argued for animal rights.