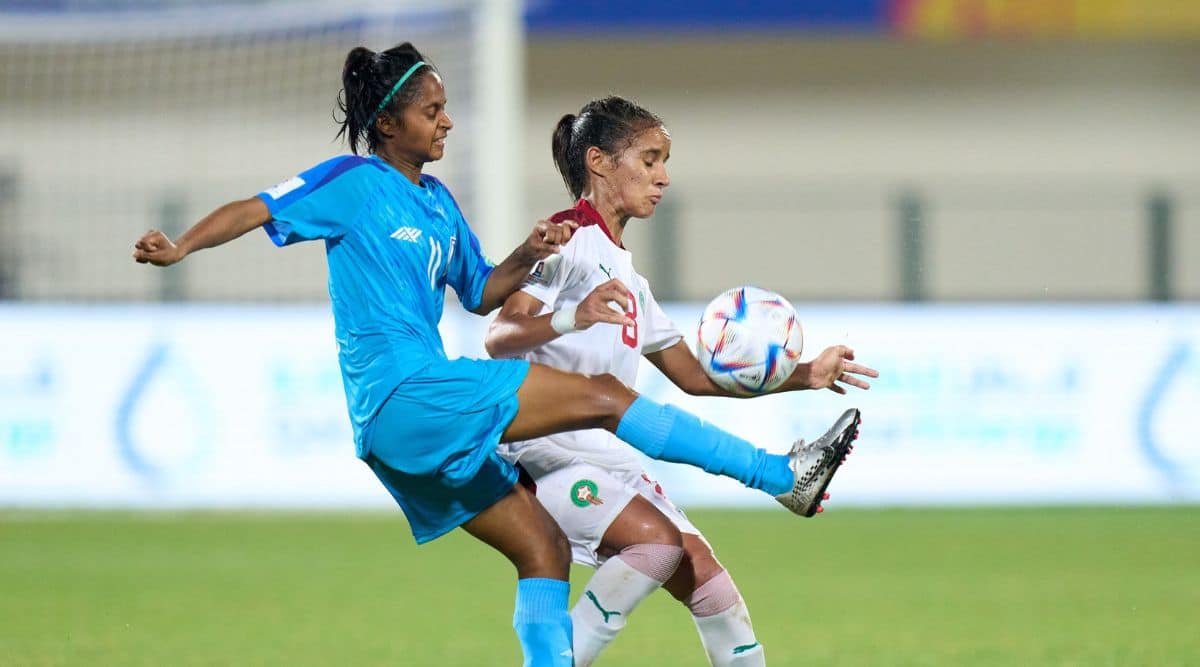 After 180 minutes of football, India’s chances of going past the group stage of the U-17 Women’s World Cup are over. The hosts lost 3-0 against Morocco in the battle of debutants on Friday at the Kalinga Stadium in Bhubaneswar. With no points from two games, India cannot mathematically qualify for the knockouts with one more game to go.

While their big 8-0 loss to the USA in the opening match was understandable, India have only themselves to blame for the loss to Morocco. Though they fought brilliantly, two mistakes, both in the second half, cost them the game and their chances in the tournament.

It was a big moment for Morocco too, who got their first-ever win in a FIFA Women’s World Cup.

India coach Thomas Dennerby had said ahead of this match that his team “need to fight it out and have no other option left”. And that’s exactly what India did.

Against USA, India looked nervous and lost. They were tactically and physically overpowered. It seemed like they learnt their lesson quickly. Against Morocco, they stood strong, defended courageously, and were able to trouble Morocco with their attacks, something which they absolutely lacked in their opening game.

Morocco, who had lost to Brazil by just a solitary goal in their opening match, were the favourites going into the game. It was their defensive game that troubled the fancied Brazilian attack and India knew that they would have to come up with something extraordinary to score.

Dennerby made three changes to the starting XI, including bringing on goalkeeper Melody Keisham, and it seemed to work. With Nitu Linda and Kajol D’souza combining well in midfield, India managed to create a few moves that troubled the Moroccan defense, but it was the final ball for striker Neha that was lacking.

India enjoyed a good 40 per cent possession in the first half an hour of the match and it seemed everything was going to plan for Dennerby’s side. To keep themselves alive in the tournament, India needed at least a point. When the first half ended goalless, the expectations rose. Could India really manage to get their first point at a FIFA event?

Any hope of that was crushed six minutes after the break. In the chaos that ensued after a Morocco corner, India defender Naketa, while trying to block a shot and clear the danger, touched the ball with her outstretched hand. The referee immediately blew her whistle and pointed at the spot.

Morocco striker Doha El Madani made no mistake with her penalty, and though Melody guessed the direction correctly, the shot was too powerful and out of her reach.

India didn’t sit back. They played with more gumption. The Moroccan defense looked even shakier as India piled on the pressure.

And just as India looked the most threatening, Morocco doubled the lead, making the most of a mistake from Melody.

The African nation thwarted an Indian attack and started a counter of their own in the 61st minute. Melody fumbled while trying to collect an easy cross from the right.

Moroccan skipper Yasmine Zouhir, who plays for French side AS Saint-Etienne, was waiting in the center and slotted the ball home with a powerful left-footer to double her team’s score.

Despite being two goals down, India didn’t give up. Striker Anita Kumari had the best chance to pull one back in the 83rd minute after she timed her run perfectly on the left flank to receive a through ball and go one-on-one with goalkeeper Wissal Tittah. Anita chose to hit it in the first post but Tittah guessed correctly and sent it out for the corner.

Anita’s shot was India’s only shot on target in the two games at this tournament.  With time running out, India looked famished. All the work they put in over the past 10 months with exposure trips to Norway, Italy, and Spain, and training camps at Jamshedpur and Bhubaneswar was going down the drain. They tried to put on a brave face, but you could see they had lost hope.

Cherif Djennah added insult to injury in the first minute of stoppage time, easily going past the Indian defense and slotting it past Melody.

India face Brazil in their final group tie on Monday, and while qualification is out of the question, they would hope to at least get a goal against the South American giants.