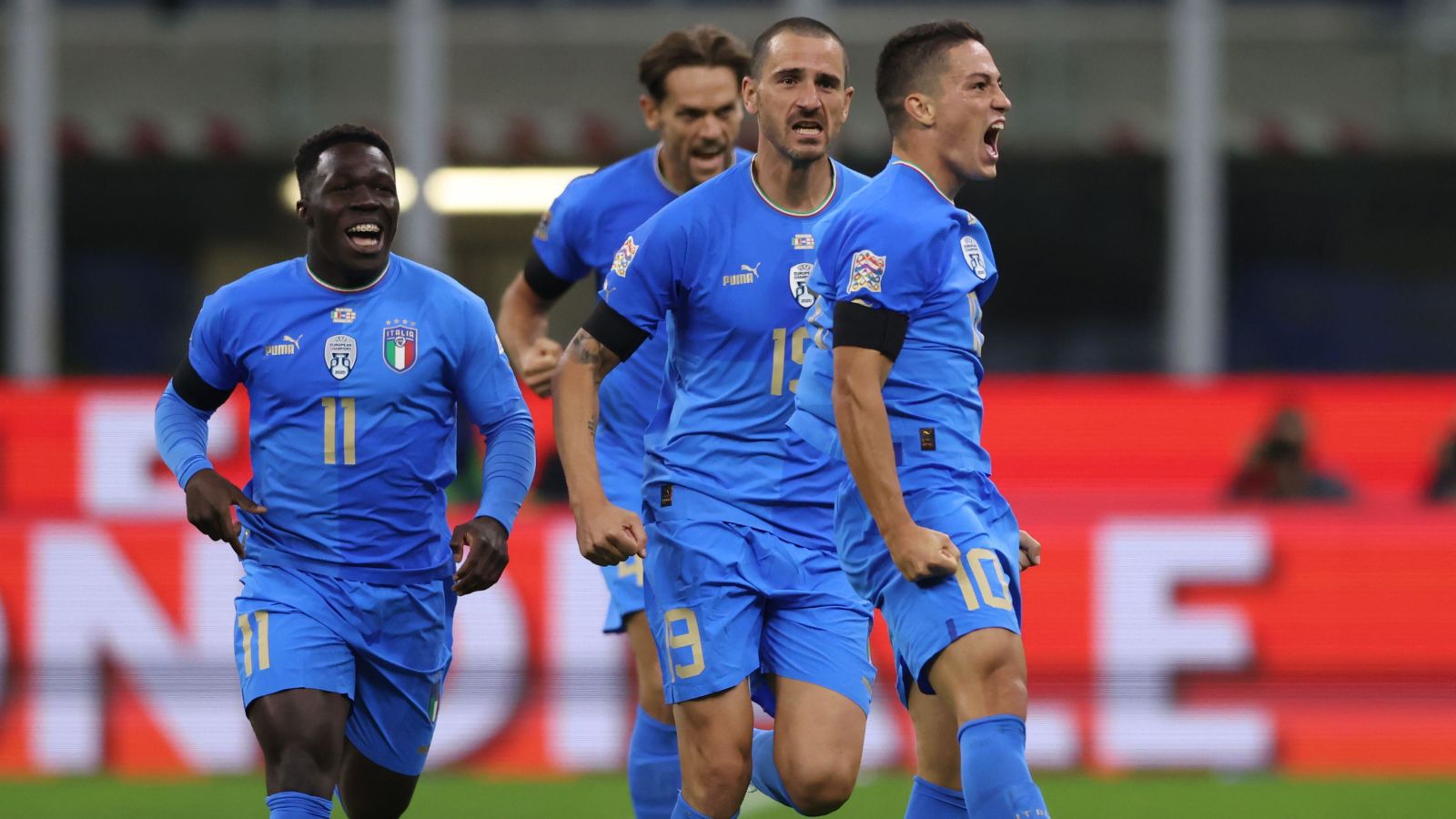 England have suffered the ignominy of relegation from the top tier of the UEFA Nations League after another lacklustre display in Milan resulted in a 1-0 defeat to Italy.

It was a game of precious little quality, and hard to believe it was between two teams who contested the final of the Euros little more than 14 months ago.

Defeat leaves England with just two points to their name from five games and means they will be in the second tier for the next Nations League competition whatever happens against Germany on Monday.

Of more pressing concern, though, will be just how poor Gareth Southgate’s side look so close to the World Cup. Their only goal in five Nations League games was a penalty; the only other team in the whole competition without a single non-penalty goal to their names is San Marino.

England are among the favourites to triumph in Qatar having reached the semi-finals four years ago and the Euro 2020 final, but things have gone badly awry this year.

England failed to win any of their four June fixtures and produced a meek response to their 4-0 Molineux mauling against Hungary with Giacomo Raspadori sealing victory for Italy, who have been in poor form themselves and failed to qualify for the World Cup.

The Euro 2020 finalists had played out a forgettable goalless draw behind closed doors in June and the first half in Milan somehow managed to be even more dreary as England toiled against the absentee-hit Azzurri.

It did not get any better from the visitors’ perspective as Italy kept them at bay and secured victory through Raspadori’s fine effort.

Southgate’s side lacked the ruthlessness called for on the eve of a San Siro encounter that ends with more questions than answers, with just Monday’s home match against Germany to come before the World Cup.

Bukayo Saka, named England men’s player of the year earlier in the day, was deployed at left wing-back at San Siro, where Eric Dier won his first cap since November 2020 among six alterations from the Hungary humbling.

Harry Maguire was another brought in and the out-of-favour Manchester United captain’s name was sung by the 4,415 travelling fans in an expression of support that followed Southgate’s public backing on Thursday.

The 29-year-old settled after a shaky start as Italy began on the front foot, with Gianluca Scamacca all too easily beating him to a deep Federico Dimarco cross from the right.

A combination of Nick Pope, deputising for the injured Jordan Pickford, and the woodwork denied the West Ham striker’s powerful header at his near post before the frontman struck wide from distance.

England quelled that storm and began to enjoy periods of possession, albeit without injecting creativity and excitement into their play.

Cumbersome with the ball, there was precious little to note in terms of chances beyond Jude Bellingham’s strike into the ground and Harry Kane lashing over from distance.

Thankfully there was no additional time at the end of a wretched first half.

Dier produced an important block and Reece James woefully overhit a well-placed free-kick after Leonardo Bonucci had tripped Raheem Sterling on the edge of the box.

Phil Foden threw his hands in the air in frustration as Kane took a shot from an acute angle when he was free at the back post as the visitors’ disjointed display continued.

England were fortunate that a mixture of the offside flag and Nicolo Barella’s poor finishing prevented them falling behind in the 57th minute after Dimarco was put free to send a pinpoint cross to the far post.

The deadlock was finally broken in the 68th minute as the Azzurri struck.

Bonucci’s long ball put Raspadori in behind Kyle Walker, with the forward keeping his cool before sending a lovely strike beyond Pope from just inside the box.

Kane forced Gianluigi Donnarumma into a double save as England hunted a leveller, with former Southampton forward Manolo Gabbiadini seeing a shot saved by Pope at the other end before Dimarco’s cross-shot hit a post.