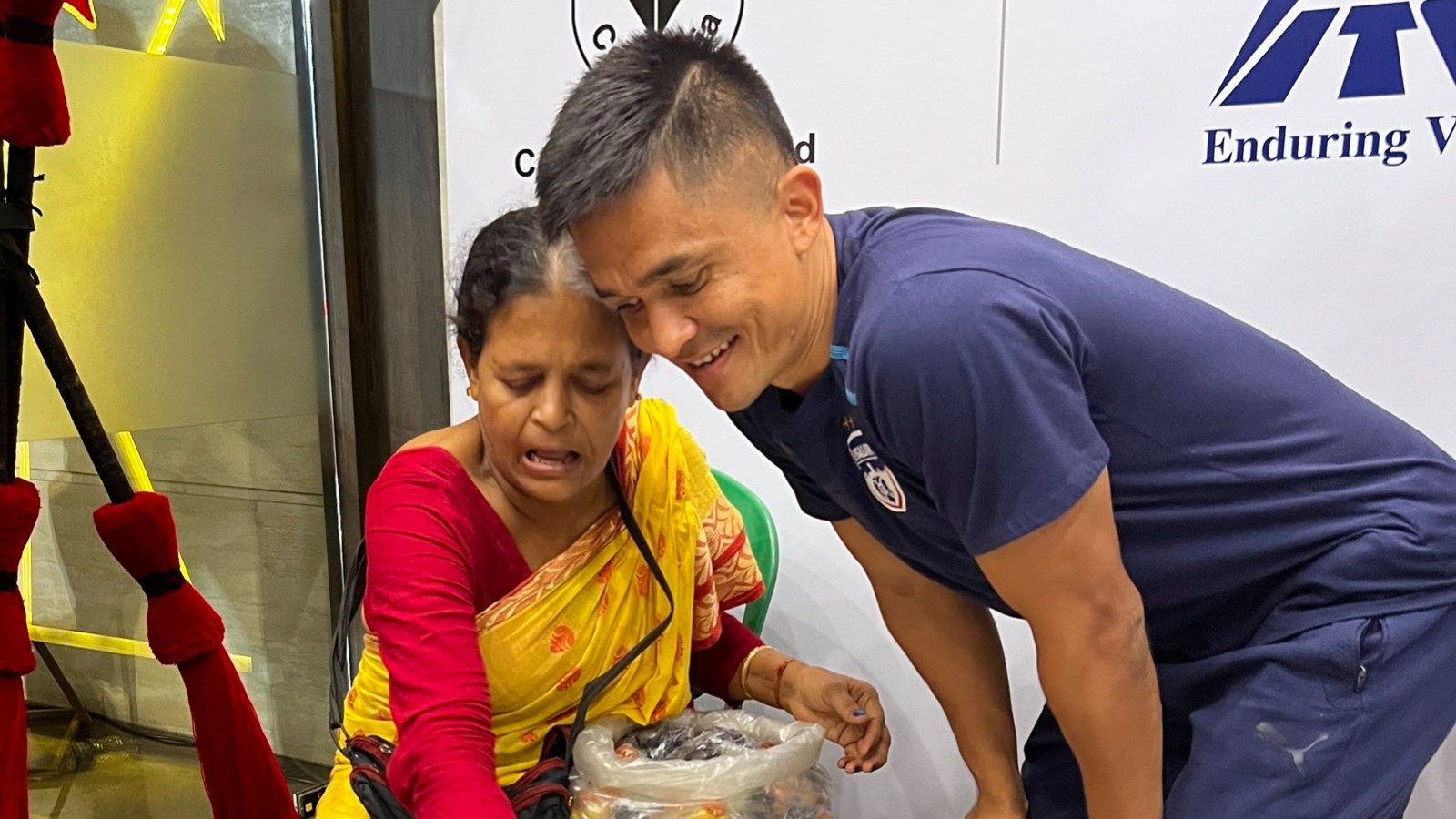 A candy vendor has become an inspiration to footballers. Hard to believe, but it’s true.

Fifty-eight-year-old Jamuna Maashi (aunt) Das is an ardent football fan and has never missed a single match played in Kolkata’s football maidan in the last 30 years.

Such is her love for the game that she has been present for every national, local or league game- and every player who has set foot to lay there has a personal connection with her.

For decades, she’s the one with all the sweets at the Salt Lake. Default mother to so many footballers. Iron voice, softest heart. Jamuna ‘Lozenge Maashi’ Das is every bit a legend of #IndianFootball. For all the love she’s given, we wanted to give back just a little ♥️ #WeAreBFC pic.twitter.com/HZYEuMYTmn

She cheers for them, encourages them and gives them a small candy or lozenge as a token of her love. She is popular not as Jamuna but as Lozenge (candy) Maashi.

Bengaluru FC and Indian football captain Sunil Chhetri along with his team members decided to honour this ‘mother-like’ figure to all footballers by inviting her to lunch. She spent a couple of hours speaking to the players while sharing her journey with football over the last three decades.

Chhetri spoke to News18 about how Jamuna Maashi is a veteran in her own way.

He remembers her presence at every game that he has played, her words of wisdom when he did not win a match and the most important gesture that every footballer who has set foot on the maidan in Kolkata has experienced – getting candy from her as a token of her love – has built a special one.

“When I came into the field she was already a ten-year-old veteran on the maidan. Right from the time when I was young till now she has been there for the numerous games, I have played. When I have done well, when I haven’t, when I have scored or missed goals, she has been with me all the way. Her small gesture when I was young of giving me candy when I did not do well or just saying something nice to perk me up, Jamuna Maashi has been there for us,’ Chhetri said.

Though she lives alone in her home in Kolkata’s Agarpara, Jamuna says that she will go to the football field every day till her last breath. Such is her love for the game that she compares it to the oxygen we breathe.

“I cannot live without football. For me, it is like oxygen. Had I not gone to the football field all these years, how would I have found Sunil, who is like my son, and other footballers who are like my brothers?” she told this reporter over the phone.

Recalling her earlier days, Jamuna said she would watch footballers play from a young age. She would closely watch their game and understand their technique. While she loves the game, she never played it.

‘’I love watching it. I did try a bit to play but that was only for fun as a child. I am a candy seller and when I went to the maidan I sold candies to the spectators and cheered my football brothers on the field,’ Jamuna said.

When asked why she gave candy to the players each time, she broke into a hearty laugh and said ‘: Accha lagta hai. Lozenge meetha hota hai aur main unko haste hue meethe din dena chahti hoon ( I like it. I want them to have a happy and sweet day).

‘”Those sweets are candies and she knows that lot of our boys do not eat candies. It is amazing the things she knows. When someone says they don’t want candies, she smiles and asks them to give it to their family.,’ Chhetri said about how the boys react when given candy by Lozenge Maashi.

Chhetri describes her as a mother figure to all the players. Her dedication to the game is unbelievable and credited her for being the sport’s biggest fan – a veteran who has been to every game for the past 30 years, was how he described her to his teammates at the recent lunch event.

For Jamuna, that was the day that she will never forget.

“That is the day I will cherish til I die. They have given me so much respect that I don’t know how to repay it. I may not be Sunil’s birth mother, but he has done for me more than my own child would do. I got so much love, and respect and I have nothing but gratitude in my heart,’ she said.

Chhetri credited the Bengaluru FC team for inviting their Maashi to spend some time with their team members.

“She got a bit emotional and she told us that the respect that she got is not common. She told me a lot of people help to make her life better, but a club bringing her in and making her part of the team lunch and bonding was truly unique. she choked a bit and we all did too. In the end, we were happy to bring a smile to her face,’ the Indian football captain said.