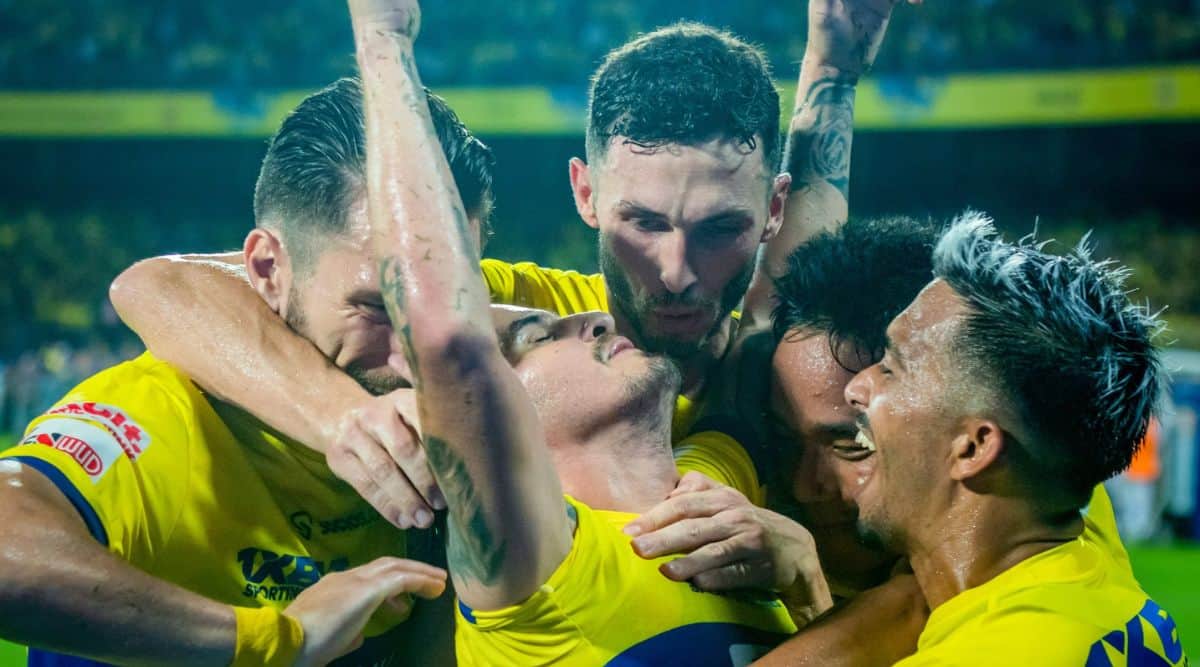 For 70 minutes, more than 60,000 yellow shirts squealed and howled as they watched Kerala Blasters squander one opportunity after another. For the next 20 minutes, they brought the proverbial roof down, bouncing in the stands and celebrating three outrageous goals in the 3-1 win over East Bengal in the opening match of the Indian Super League season in Kochi on Friday.

It was an emotional night for the fans and players alike. The opening night of the new season marked the return of spectators after more than 1,000 days as the last two seasons of the league were played in a bubble due to the pandemic. For the players, the reasons were a lot more personal.

Take for instance the case of Adrian Luna. In April, the Uruguayan striker lost his six-year-old daughter Julieta to cystic fibrosis. On Friday, he teared up after scoring the season’s first goal, pointed to the heavens and dedicated it to his daughter.

And it was a truly special goal. In the 72nd minute, Harmanjot Khabra, a streetfighter of a defensive midfielder, launched an aerial ball from near the half-line that floated into the East Bengal box. The defenders were caught ball-watching. Luna snuck behind them and stretched out his left foot to acrobatically put it past goalkeeper Kamaljit Singh from a tight angle.

“It was a special goal for me because everyone knows what I’m going through…me, my wife, family, son. This goal was for my little daughter,” Luna said after the match.

With his country at war with Russia, Kalyuzhnyi joined Kerala on loan from Oleksandriya, a club in Kharkiv, one of the several Ukrainian cities affected by the invasion.

Coming on as a substitute, the 24-year-old got his first touch and waltzed towards the East Bengal defence, which left yawning gaps in their search for the equaliser. The defenders, instead of closing him down, backed off, allowing Kalyuzhnyi to carry the ball almost half the field, get inside the box, beat three defenders and slot the ball past the goalkeeper.

On the sidelines, East Bengal manager Stephen Constantine shook his head, partly in disbelief and partly disappointed with his defenders for not doing better to stop Kalyuzhnyi.

East Bengal pulled one back in the 87th minute through Alex Lima but Kalyuzhnyi settled the affair two minutes later. An East Bengal defender’s headed clearance from a corner fell straight to Kalyuzhnyi at the edge of the box and without much of a back-lift, he unleashed a powerful left-footed shot that almost tore the net.

The goal ensured all three points for Blasters, who made an emotional evening even more memorable for the 60,000-odd fans who had returned to the stadium after more than two years.