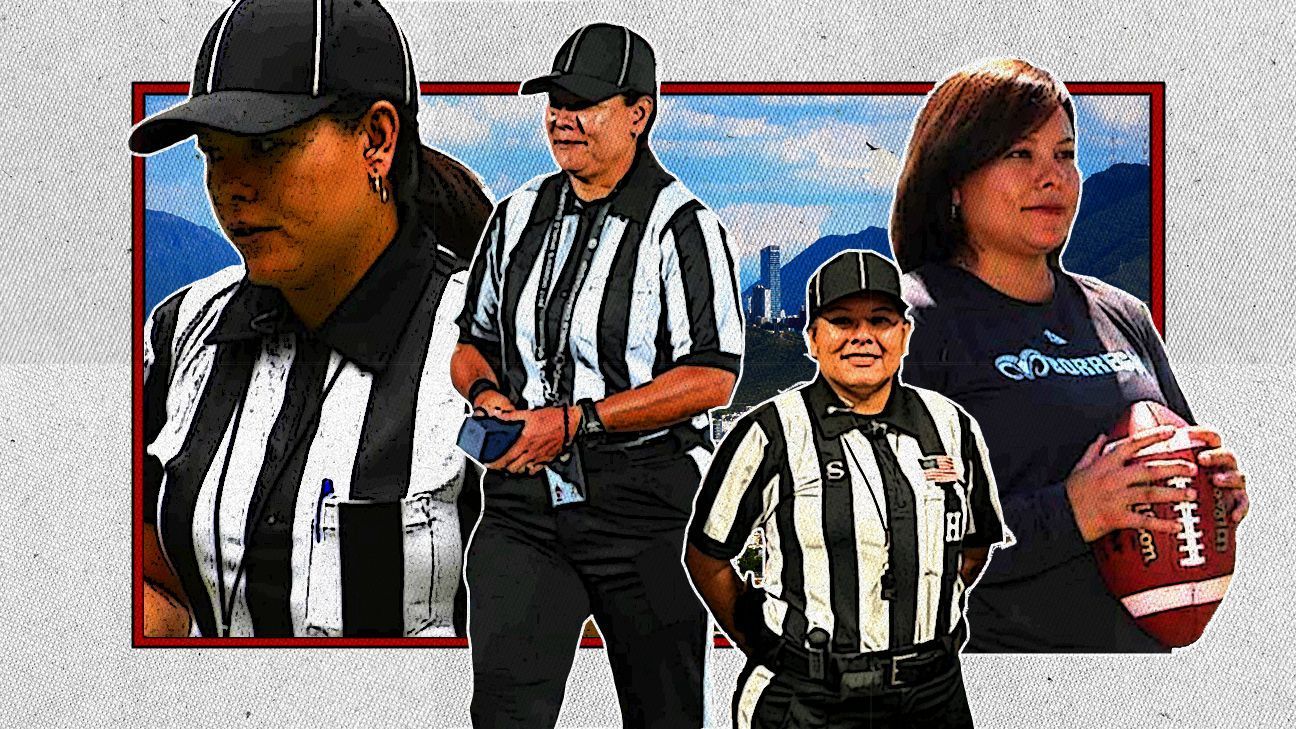 When Gabriela Martinez decided to make a career in football, she followed a path lined with hard work that would eventually allow her to reach her goals. That tenacity — and a bit of influence and support from her brother early on — has served the NCAA’s first football official born in Mexico regardless of gender well on her trailblazing journey.

“My brother Carlos would make me watch NFL games with him, especially his Oakland Raiders,” Martinez said. “He’s the one who suggested I become a referee, and he’d be the one to ask my parents’ permission to go to stadiums and games.”

Since September, the native of Monterrey in the northern part of the country has been a part of officiating crews at the FCS Division I level with the Missouri Valley Football Conference and will also work Division II games this month. Her curiosity as a student of the game opened the door for her to officiate within the Collegiate Officiating Consortium, an organization that helps recruit, train and evaluate potential referees. Among the leagues that comprise the COC are the Big Ten, the MVFC and the Division II Southern Intercollegiate Athletic Conference.

Additionally, Martinez is on the coaching staff of one of Mexico’s most storied football programs, Monterrey Tech — the first woman with such a charge in the country’s top student football league. The 42-year-old mother of a high school student also holds a graduate degree in sports administration from Florida’s St. Thomas University.

Not bad for someone who grew up collecting bottle caps and hanging them around her neck, dreaming they were Olympic medals — all the while picking up football on the side.

Martinez’s perseverance has won over several influential people in the officiating ranks. She credits Bill Carollo, who in 2008 became coordinator of officials for the Big Ten after 19 years as an NFL referee, with playing a vital role in her growth and development as an official. She met Carollo at an officiating clinic about five or six years back and found herself at ease discussing her career prospects with him.

“I followed up and started sending him emails, text messages, calling,” Martinez said. “I would ask him technical questions about officiating, making it known I was interested, and that planted a seed that made him one of my main mentors and opened doors for me to Big Ten clinics.”

For his part, Carollo said he was instantly impressed by Martinez’s curiosity, which made her stand out in a room with just a few female attendees.

“She caught my attention by just the questions she asked, her interest in American football,” Carollo said. “She was very assertive, very confident and not afraid to ask a question because she didn’t know the answer, so you asked a question.”

That was in a classroom setting. Once on the field, the inexperienced Martinez was nevertheless able to draw Carollo’s attention once more.

Carollo invited Martinez to attend the Big Ten’s Diversity, Equity and Inclusion Clinic for officials at Penn State in April. Those in attendance had the opportunity to officiate the Nittany Lions’ annual Blue-White game, in which Martinez was tabbed as a line judge.

Thank you to all the presenters at the 2022 #B1G Diversity, Equity & Inclusion Clinic for officials at Penn State.

Our coordinator of 🏈 officials, Bill Carollo, leading the efforts. pic.twitter.com/XQBWb1MgMg

Carollo thought enough of her officiating from that game that he offered her a chance to work regular-season NCAA games.

“Bill asked me if it wasn’t too much of a sacrifice economically, but he gave me a vote of confidence because I told him that wasn’t an issue,” said Martinez, who lives in Monterrey. “What was important was him giving me that shot.”

Carollo asked Martinez to keep officiating at the lower levels, and if he noticed improvement he would help her along. Eventually, he spoke with the SIAC’s coordinator of officials and requested Martinez’s inclusion in five games — all in Atlanta — at the FCS level. She worked her first of three MVFC games on Sept. 3 and will fill out the remainder of her schedule with two SIAC games in October.

“Since 2016 I told myself that if I believed, I could reach that level,” Martinez said. “It was then that I started to save money, and that investment in myself is what’s helped me out. I don’t see it as an expense but a means of doing what I want to do.”

Another key development during Martinez’s rise to the collegiate ranks came by way of financial assistance. She received a scholarship to attend the prestigious Tom Beard’s Football Officials Clinic in Baltimore after writing its committee asking if it offered such opportunities.

“They helped with everything, I just paid for my plane fare and they helped pick up the hotel and meals,” she said. “Carollo was also at that clinic, and he told me to do my thing. I did it well and one of the Big Ten supervisors came by to offer praise on what I was doing.”

Carollo said he’s a big believer in diversity improving his crews. Still, regardless of background, he looks for officials with the capability to understand the game, who can make calls under pressure and who possess good character.

“She brings a nice, calming situation, because she listens more than she talks,” Carollo said. “Some of my guys do a lot of the talking because they think they have all of the answers.”

Though her work on the field was exemplary, Martinez realizes that her character and personal style also made a difference.

“To advance in the U.S., you have to be straightforward and authentic,” she said. “That’s what you’ll find in Big Ten officials. They look for people with clear objectives, who are not looking to be famous. Until now, I’ve done well enough that most of the officials know me and where I come from. I’ve earned that through my performance, not because I’m friends with someone or got along.”

Added Martinez: “I’ve written Carollo when I find myself in tough situations and he’s told me that the road to success is tough, but he follows up with the same advice: Do your thing. I’m living a dream, but it doesn’t supplant another higher goal, which is to reach the top level of the best conferences in the NCAA.”

The journey of Martinez, whose father, Tomas, died just a few days ago, has certainly bumped into the built-in challenges that came with being a female official. On top of that, Carollo points to the fact she lives in a country where soccer games are a lot more common than football in sandlots. Still, Carollo sees an official in Martinez who is most worthy.

One moment that Martinez treasures more than others came in 2019, when she met Sarah Thomas, the NFL’s first female official, at a Big Ten clinic for female officials.

“We all told the same story, about the path go getting the people involved in the process to stop seeing you as a woman and a novelty, and instead as another part of the team who is going to put in as much as everyone else,” Martinez said.