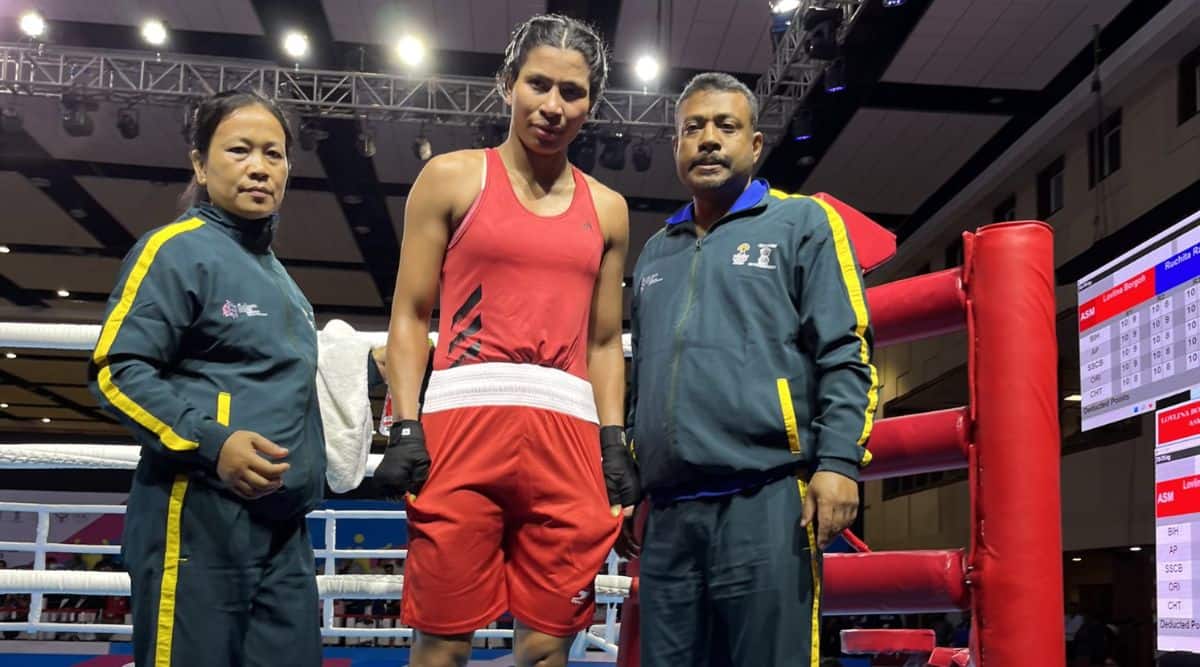 Also advancing to their respective finals were Services heavyweight boxer Sanjeet, Punjab’s Simranjit Kaur and Mandeep Kaur, national championship silver medallist duo of Ankit Sharma and Minakshi of Haryana while Assam’s Ankushita Boro set up an exciting summit clash against Manipur’s Alena Thounaojam in the 66kg welterweight category. Home state boxers Aasifali Asgarali Saiyed and Ruchita Rajput had to settle for bronze medals after losing their respective bouts. In the women’s 75kg middleweight category, Lovlina lit up the ring, displaying her class against local girl Ruchita, who looked good in patches before the lanky Assamese used her experience to win the bout and set up a summit clash with Haryana’s Saweety Boora.

In the men’s 57kg featherweight category, Gujarat’s Aasifali went down by unanimous decision 5-0 to Haryana’s Sachin Siwach, who will be up against two-time CWG medallist Hussamuddin of the Services in the final.

However, it was heartbreak for multiple Asian championship medallist Shiva Thapa of Assam, who went down 2-3 in a close bout against Services’ Akash. His statemates, Jamuna Boro (57kg) and Pwilao Basumatary (60kg) also had to settle for the bronze medals. Meanwhile, Maharashtra pugilist Nikhil Dubey got a great opportunity to pay his tributes to his coach Dhananjay Tiwari, who passed away in a freak road accident while travelling from Mumbai to watch his ward play the men’s middleweight 75kg semifinal against Services’ Sumit Kundu.

Nikhil clinched the bout 4-1 to set up a title clash against Mizoram’s Malsawmitluanga, who got the better of Goa’s Puspender Rathee 5-0.

Earlier, Asian championships bronze medallist Jasmine used her longer reach and nimble footwork to great effect against her lesser known Manipuri opponent Pravish Konthoujam to storm into the final with a 5-0 win in 60 kg category. Olympian Simranjit Kaur got rid of Assam’s Pwilao in the other semifinal.In the women’s 66kg, former Asian youth champion Ankushita forced the referee to give two standing counts of eight within 30 seconds of the opening round against Rajasthan’s Lalita before walking away with a one-sided 5-0 win.

In the process, Ankushita, the bronze medallist at the 2022 Elorda Cup in Kazakhstan, extended her unbeaten record to fourth against the Rajasthan pugilist. In the other last four bout, Manipur’s Alena registered a close 3-2 split decision victory over Punjab’s Komalpreet Kaur. In the men’s 92kg heavyweight division, reigning Asian champion Sanjeet recorded a first round RSC win over Rajasthan’s Neeraj Kumar. In the summit clash, Sanjeet will now look to avenge his recent loss at the Asian Championship trials against Haryana’s Naveen, who beat Punjab’s Kanwarpreet Singh by split 4-1 decision.

In the men’s +92kg super heavyweight final, Chandigarh’s Sawan Gill will take on Services’ Narender. Three other Services’ boxers, Etash Khan Muhammed (60kg), Akash (67kg) and Sachin Kumar (80kg) also made it to the finals of their respective categories.