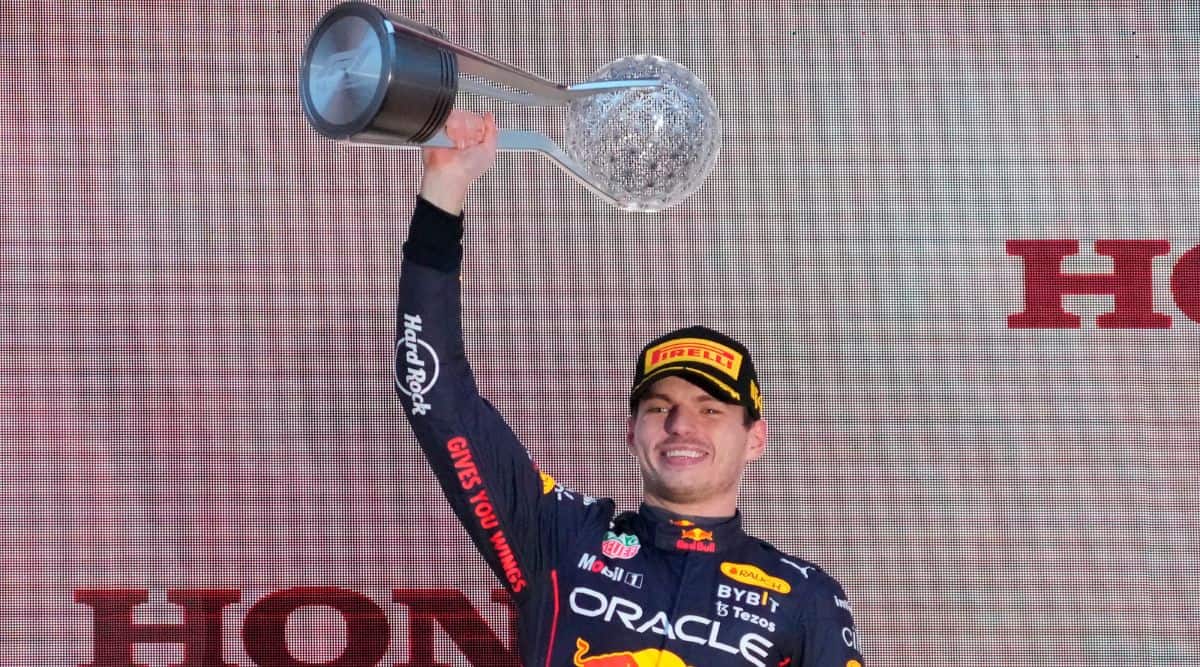 Red Bull’s Max Verstappen wrapped up a second successive Formula One title on Sunday with victory in a rain-shortened Japanese Grand Prix after his closest rival Charles Leclerc was hit with a post-race penalty.

Dutchman Verstappen had crossed the line ahead of the Ferrari driver who, defending against the other Red Bull of Sergio Perez, took the chequered flag a distant second.

But the Monegasque had five seconds added to his race time for cutting across the final chicane on the last lap which dropped him down to third.

“It’s a crazy feeling of course as I didn’t expect it when I crossed the line,” said Verstappen amid confusion over whether reduced points under new rules introduced this year would apply with the race running to just over its halfway mark.

Red Bull driver Max Verstappen, right, of the Netherlands is sprayed with champagne by second placed teammate Sergio Perez of Mexico on podium during the Japanese Formula One Grand Prix at the Suzuka Circuit in Suzuka, central Japan, Sunday, Oct. 9, 2022.(AP Photo/Toru Hanai)

“Was it going to be half points, I didn’t know how many points I was going to get,” he added.

The sport’s governing FIA clarified that the reduced points rule only applies to races that are suspended and cannot be resumed.

Sunday’s race was halted after two laps due to heavy rain but it resumed a little over two hours later, with drivers completing 28 of the scheduled 53 laps and full points awarded.

Verstappen as a result leaves Japan with a 113-point margin over Perez, who now moves into second in the overall standings. He needed at least 112-point margin to his closest challenger to be crowned champion on Sunday.

Verstappen’s win in Japan was his 12th from 18 races. With four races left, the Dutchman is on course to beat the record for most wins in a season which, shared by Michael Schumacher and Sebastian Vettel, stands at 13.

“Max has just been incredible,” said Leclerc, the early title favourite who held a 46-point lead over Verstappen after the opening three races.

“We will try to push over the last four races to improve as a team and hopefully put more of a challenge next year.”

He was beaten off the line by Leclerc in the wet but went wheel-to-wheel with the Ferrari, spray streaming behind them, over the first two corners and seized back the initiative.

Incidents involving several cars brought out the safety car before the opening lap could be completed, while a recovery vehicle deployed on the track caused alarm as Pierre Gasly’s AlphaTauri sped past.

The conditions forced a halt to the race on the second lap and, after the two-hour delay, it resumed with a rolling start.

But Verstappen disappeared into the distance and was classified as having finished 27 seconds clear of his team mate.