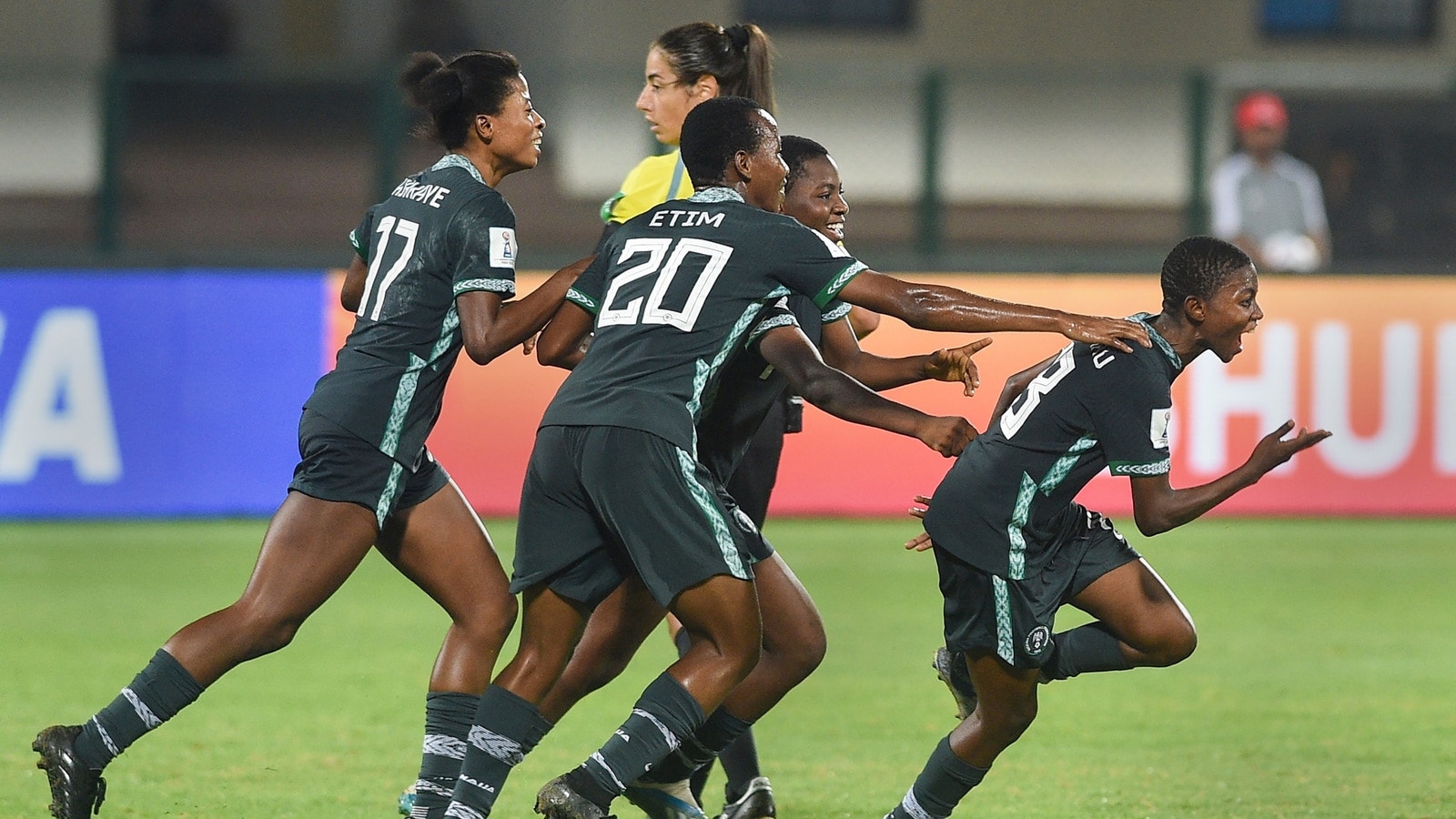 
Nigeria joined Germany as the second team from Group B to make the quarter-finals of the under-17 women’s World Cup after a 2-1 win against Chile on Monday; the scoreline not reflecting the domination, speed and skill shown by the Africans. But after a performance this convincing—and one that sealed a fourth quarter-final berth for Nigeria in seven editions—it fit that skipper Blessing Emmanuel would say, with a wide smile, “we are not afraid of either Brazil or USA, bring them on.”

Alex Castro sat on his haunches like Marcelo Bielsa, and like the former Chile national team coach, he also used the cooling box as a seat in the technical area. The coach clapped loudly, kept encouraging his team. But for all his exhortations, Chile could never really threaten Nigeria in what was a must-win game for them.

Encapsulating Chile’s show here was right-back Anais Cifuentes unable to direct her pass to Constanza Oliver early in the first half, and in the 35th minute, skipper and central defender Catalina Figueroa, under no pressure, splaying a pass wide of left back Monserrat Hernandez. Or Tali Rovner, the left-side centre-back, being unable to find a teammate with a square pass thereby killing a rare breakaway attempt when they were 30 minutes from going home. Paloma Bustamente slapping the ball just before the final cooling break summed up Chile’s night. Her shot in the 48th minute that didn’t get enough bend was their first on goal.

Chile had more possession but it was in their own half. They found the pace of Opeyemi Ajakaye and Amina Bello, the Nigerian forwards in the 4-4-2- formation used by coach Bankole Olowookere, difficult to deal with. When Chile left too much space for captain Blessing Emmanuel, who had a clear look on goal, Nigeria took the lead in the eighth minute.

Following a throw-in from the right, Bello found player-of-the-match Ajakaye, who stabbed it back for Emmanuel to bury it into the bottom corner leaving Chile goalkeeper Catalina Alvarado screaming at her backline. It could have been 2-0 in the 17th minute but this time Alvarado stuck a leg out to deny Bello after Ajakaye had played her through. But for a goalline save from Hernandez, off a header from Bello that had gone beyond a scrambling Alvarado, the insurance goal would have come before half-time for Nigeria, who needed only a draw to advance from the group that also had last edition’s third-place finishers New Zealand.

Nigeria, who beat the senior team of Galatasaray in the build-up to this competition, continued to ask questions through Bello and Ajakaye but either the pull-back didn’t go to feet or Alvarado saved or the framework came in the way like in the 73rd minute when Ajakaye’s shot thudded into the horizontal. It was 2-0 finally in the 82nd minute when 15-year-old Bisola Mosaku banged into the roof of the net following a free-kick from the right which was headed back by Bello.

Mosaku raced towards the touchline and saluted her coach who reciprocated. “It is a way of showing that we have done it, a mark of respect to the nation,” said Olowookere, whose team won two of their games, losing 1-2 to Germany after taking the lead.

Tali Rovner got her second penalty conversion of the competition in the 90+1 minute after the first VAR intervention in five games here; Italian referee Maria Ferrieri taking a long look at the monitor before deciding that 14-year-old Amber Figueroa’s shot had touched Omamuzo Edafe’s hand after grazing her knee. All thoughts of a late spurt from Chile though were doused by Nigeria getting two more chances which were saved by Alvarado.

Not having qualified for the last edition, Olowookere said this is a big deal for him. “But we have not achieved anything as a nation. Yet. Our best so far has been the quarter-final. Let’s see if we can improve on that.”