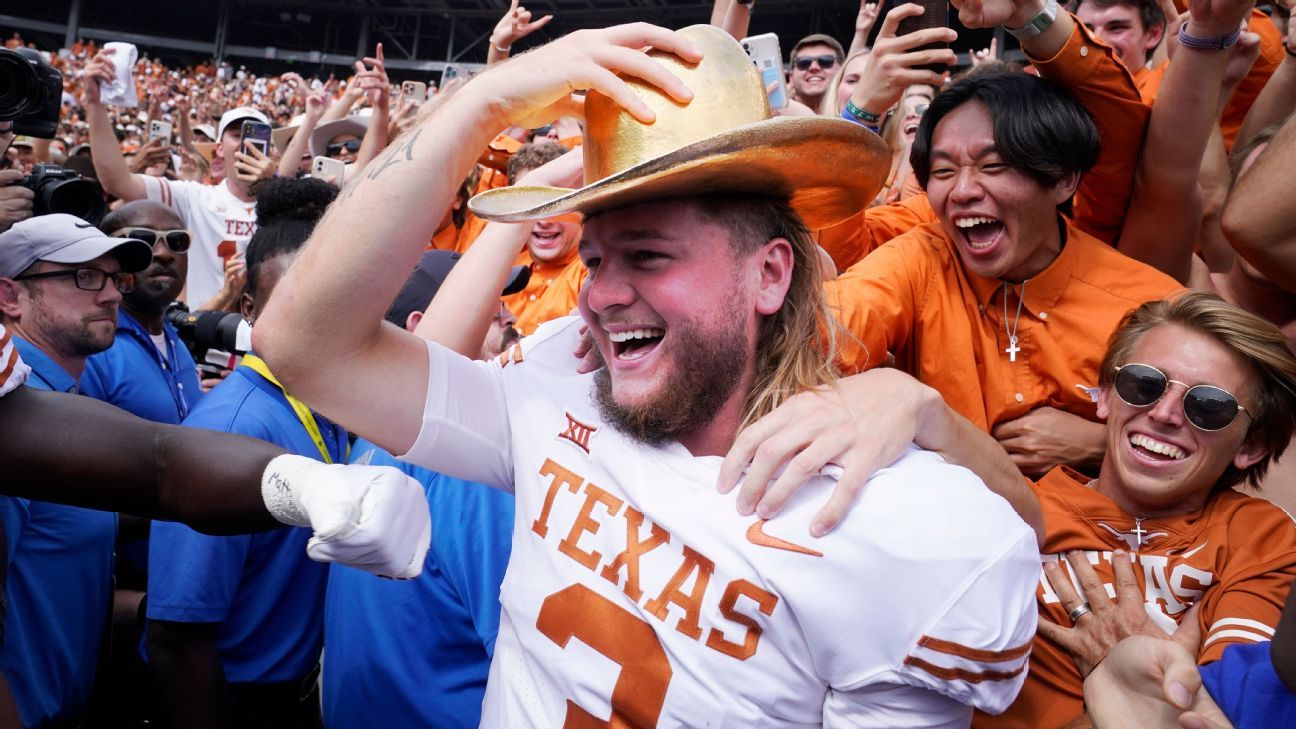 DALLAS — Quinn Ewers finally got a chance to play in his first Red River Showdown, and he made the most of it, leading Texas to a historic 49-0 win over Oklahoma.

After getting the starting nod late this week following recovery from a clavicle injury suffered in Week 2 against Alabama, Ewers threw for a career-high 289 yards, completing 21 of 31 passes for four touchdowns and one interception.

The redshirt freshman from Southlake Carroll, who played high school football about 30 miles from the Cotton Bowl, said it was a dream to play in this game.

“I know all these guys were pretty excited but growing up a fan, I always wanted to play in this one,” Ewers said. “So it’s pretty special.”

Ewers’ demeanor in the raucous environment of the rivalry game in the middle of the State Fair of Texas impressed his teammates.

“His poise in any situation is unmatched,” said Jordan Whittington, who caught five passes for 97 yards. “He just looks calm, relaxed the whole time. If you went to war with somebody and you look at him and he’s freaking out, you’d probably freak out. You got Quinn in a war with you, you’re just chilling. So I’d be relaxed, too.”

Texas coach Steve Sarkisian said he didn’t decide on who would be the starter until late in the week after both Hudson Card and Ewers, who had been struggling with injuries, both looked healthier than they had been in weeks.

“I know everyone thinks this was the plan all along or something,” Sarkisian said. “I didn’t notify Quinn or Hud of what was going to happen this week, literally, until Thursday afternoon.”

But he said both quarterbacks were ready, and he was happy about how Ewers performed.

“Quinn was spot on,” Sarkisian said. “The ball was going where it was supposed to go, on time. And the playmakers made their plays. … In the end, he was ready, and that’s why we did what we did.”

The blowout made history for both teams, marking Texas’ biggest margin of victory in the 118-game series as well as the Longhorns’ first shutout win over OU since 1965. For the Sooners, it was their biggest shutout loss in history, surpassing a 47-0 defeat by Oklahoma State in 1945), and was the third-largest margin of defeat in program history. After a 55-24 loss to TCU last week, the Sooners have now lost back-to-back games by more than 30 points for the first time in school history.

It also ended a 311-game scoring streak by Oklahoma, which was the seventh-largest in the FBS, and ended an FBS-best streak of 167 straight games with an offensive touchdown.

Without Dillon Gabriel, who is in concussion protocol and was ruled out this week by Oklahoma coach Brent Venables after suffering a blow to the head in last week’s loss to TCU, the Sooners tried a patchwork approach at QB, using backup Davis Belville, who went 6 of 12 for 38 yards and an interception, along with wildcat formation plays featuring a tight end, running back and wide receiver taking direct snaps, before true freshman Nick Evers entered the game in the fourth quarter. Venables would only say after the game that Gabriel was progressing and they will be monitoring his availability.

“We were good enough on both sides of the ball to be a lot more competitive and have a chance to win the game than what we displayed,” Venables said. “The responsibility starts with me, and I obviously did a very poor job.”

For Texas, which had lost four straight to Oklahoma, it was a chance to celebrate, particularly for seniors like linebacker DeMarvion Overshown, who is finally able to bring the Golden Hat trophy back to Austin.

“Not being able to bring the hat home four years in a row, it was heartbreaking,” Overshown said. “But leaving with it this year, you’re never gonna forget that. … Now when people ask us about our senior year what happened with the OU game, we can tell them with a smile on our face, ‘Yeah, go ahead and sit down.'”

Ewers didn’t downplay the significance of what it meant for him to win the game for his home state.

“We all circled this one on the calendar,” he said. “Especially to all of us because they come into our state, you know, and we own the state. For them to come in and for us to finally get the hat back, it’s a lot of fun.”