An hour gone at London Stadium, and it looked like being one of those days for Gianluca Scamacca.

He had missed four highly presentable chances to score – two free headers aimed too close to Fulham keeper Bernd Leno, another powered wide from six yards, plus a first-half one-on-one sent beyond the far post.

On 62 minutes, everything changed. A chipped through ball from Lucas Paqueta put him in on goal with Leno to beat. Scamacca calmly brought the ball down and scooped it over the German.

As he and the West Ham supporters celebrated wildly – albeit only after a long VAR check for offside and handball – hope sprang eternal that the club’s so-called striker curse is at an end.

West Ham manager David Moyes told BBC Match of the Day: “It shows he can score different goals – he had two great chances with his head – and he may have taken the hardest of them all.

“It was a deft finish. Sometimes when you are possibly offside, centre-forwards don’t often go and finish the job off, but he did.”

West Ham’s problems signing effective frontmen is well known. From Sebastian Haller to Javier Hernandez, Diafra Sakho to Enner Valencia, they have lacked a potent number 9 for some time.

The shining exception has been Michail Antonio, who replaced Scamacca with 10 minutes to go here and scored West Ham’s third after a Fulham defensive mix-up. In the Italian, Antonio finally has some much needed support and likely a long-term replacement.

Team-mate Jarrod Bowen said of Scamacca: “You never know if you’re going to be offside or if you’ve handballed, but you saw the celebrations when the goal was given.

“It was a great finish – him and Lucas have definitely played their part. If you look at his performances, he’s definitely settled in now.” 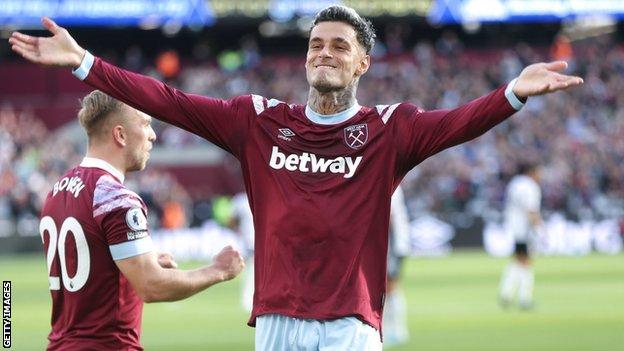 Scamacca’s goal against Fulham was his sixth in 12 matches for West Ham, and his third in eight days across three successive matches.

What is notable is how different those goals have been. Against Wolves, it was a half-volley with power into the top corner. Against Anderlecht, a first-time strike on the turn.

Against Fulham, it was by far the toughest chance of the several he had, but was clinically taken. It shows Scamacca has the all-round game needed to flourish where former West Ham strikers such as Marco Boriello and Modibo Maiga did not.

Scamacca, who signed for £32m in the summer, has become the ninth West Ham player to score in his first two home Premier League starts for the club – but the first to do so at London Stadium, illustrating how far back these forward issues have gone.

Scamacca was certainly helped in his endeavours by another summer signing in Paqueta. The West Ham number 11, operating in the traditional number 10 role, was an endless creative force and provided enough chances that the striker was bound to eventually take one.

“What Gianluca is showing is that he’s not a one-trick pony when it comes to goalscoring,” added Moyes. “He’s a young striker coming into this country who we spent a lot of money on – although not as much as some teams have spent – who is doing really well and will get better.

“And any centre-forward would want to play with Paqueta. Bits of him today were terrific.”

Fulham furious at goal being allowed

But from Fulham’s perspective, there was outrage that Scamacca’s goal was allowed to stand.

He was marginally onside, but Marco Silva and his players were convinced the forward had handled the ball. The VAR replays provided no conclusive evidence of an infringement, however, leading referee Chris Kavanagh to award the goal.

Silva was enraged, and got booked for his protests.

Fulham defender Tim Ream expressed his unhappiness with the Scamacca goal, and with Kavanagh’s earlier decision to award a penalty after Andreas Pereira fouled Craig Dawson in the box.

Ream said: “There were a couple of decisions and a couple of mistakes that ultimately cost us the match. It is something we’ll have to look at and rectify ahead of next week.

“We’ll see if decisions like the penalty are going to be called consistently this season. Hopefully so, and we’ll get the benefits of that.

“The majority of us expected Scamacca’s goal to be ruled out – Bernd Leno pointed out that was why he wasn’t celebrating. There are swings and roundabouts, though. Hopefully one goes in our favour.”