The Scots, who beat Austria in the play-off semi-finals, host Republic of Ireland on Tuesday and hope a win will seal a place in Australia and New Zealand.

Victory may also result in an inter-continental play-off for the final available place in next year’s event.

“We are in the best place that we could be,” Martinez Losa said.

“We really have a belief in what we are doing. It’s one opportunity potentially every four years.

“We just prepare for a final. We prepared for one final and now we are preparing for another final.

“It’s an incredible opportunity to be involved and play in a World Cup and inspire a generation of players and make the game better.”

Irish ‘need to put something up against Scotland’

A record crowd for a competitive women’s fixture in Scotland is expected at Hampden just five days on from it previously being smashed as the nations meet for the 22nd time.

Republic of Ireland coach Vera Pauw previously led Scotland to three wins and two defeats against the Irish and her current side finished second behind Sweden, ranked third in the world, in Group A, with a 1-0 home loss to the Swedes in October last year their only reverse.

“This is a first for Ireland if we are to succeed,” said Pauw. “Scotland has been already in 2017, 2019 so they have the experience of playing finals, of playing those play-offs and I think that is the key difference.

“Scotland have some fantastic, fantastic players in that squad who can make the difference with the core group around it. The team is really on a high and we need to put something against it.”

How the play-offs work

The two top-ranked winners from the three round play-off finals – Wales head for Switzerland and Portugal host Iceland – will qualify for the finals with the third facing an inter-confederation play-off in New Zealand in February.

Scotland need one of Wales or Portugal to win – but not win too well as both could pass the Scots in the rankings depending on results. If Portugal win by more goals than Scotland, they overtake them.

The Irish, ranked third on the basis of their qualification record to date, must win and hope that at least one of Switzerland or Iceland lose or only win on penalties. 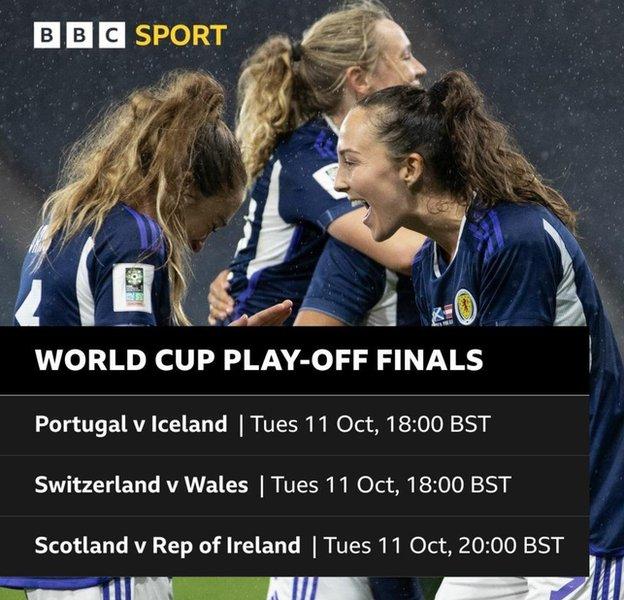 Martinez Losa selected 25 players for the play-offs and says “everyone is healthy, everyone is prepared” following Thursday’s win over Austria.

“We are happy to be together,” he explained. “The result from the last match has given us faith and energy and motivation that we already had, but more belief and so we are ready to go.

“Every individual is competing for a position.”

The Irish come into the tie fully refreshed having not needed to play last week, although a long injury list when their squad was first announced has been added to by news that midfielder Jess Ziu has suffered an anterior cruciate ligament injury.

She sustained the injury playing for West Ham on 2 October so she joins Leanne Kiernan, Megan Connolly, Ruesha Littlejohn, Ellen Molloy, Aoife Colvill and Savannah McCarthy in being unavailable for the play-off.