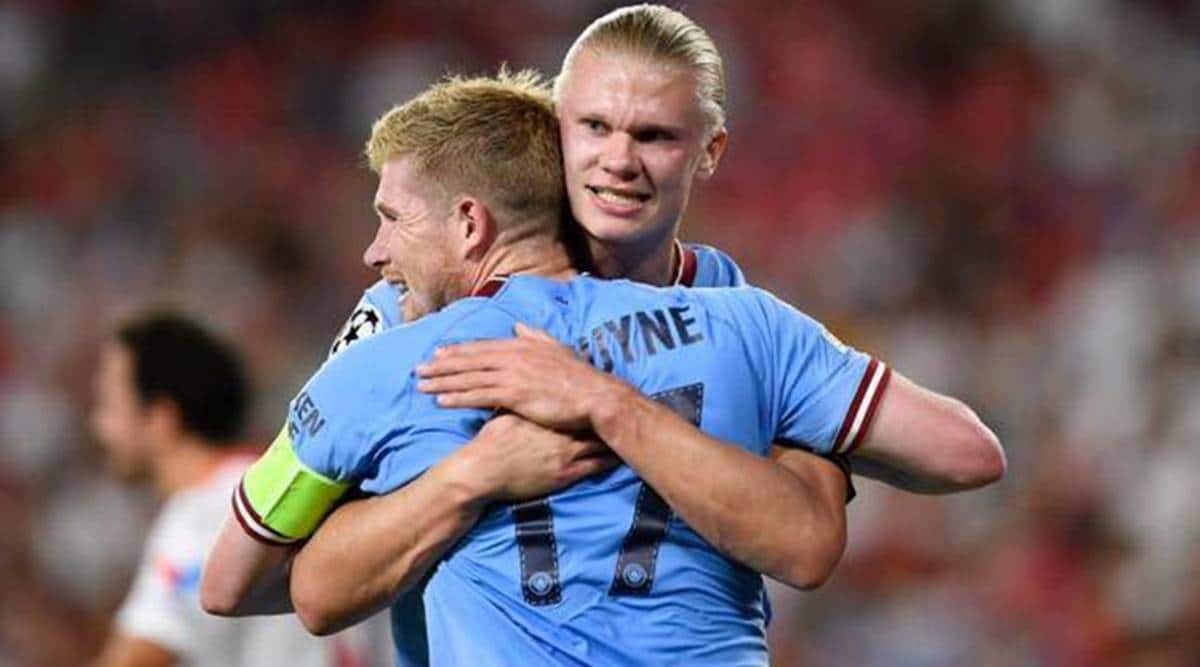 If you are a defender playing against Manchester City, what is the first thing you see? More often than not, your wandering eyes will always end up fixating on the colossal centre forward in the other half, standing absolutely still as he waits for the referee’s whistle.

As soon as the whistle blows, the defender will come face to face with his worst nightmare, as Erling Haaland’s gigantic frame peels away from his marker and marauds towards the opposition goal at lightning speed.

As soon as he makes those runs, you can bet anything that a certain Kevin de Bruyne will find a way to send the ball towards his Norwegian teammate, resulting in the ball nestling safely in the back of the net.

When Erling Haaland first signed for Manchester City, opponents were wary of the lethal partnership he could form with Kevin de Bruyne. That fear has turned into reality as the Belgian has been instrumental in some of Haaland’s absolute spellbinding goals in all competitions.

One advantage de Bruyne has over his contemporaries is that he can easily slot in any position demanded by his manager. Last season, he was City’s top scorer with 15 goals, effectively filling a gap left by the iconic Sergio Aguero. This season, after the arrival of Haaland, he has shifted back into the role of typical attacking midfielder. Nowadays, he prefers playing on the right where he can create with either foot, just like his two assists against Wolves this season, both of which were results of overlapping runs by his teammates, who were in turn fed by the Belgium playmaker.

There has also been a noticeable tweak in his position as he is playing a more advanced role as a central attacking midfielder, where he cuts away from the edge of the penalty box, towards his right, taking defenders with him, which gives Haaland a free rein inside the box due to less overcrowding.

The most recent assist on the list is the one that de Bruyne conjured up in the 36th minute of the Manchester derby on Sunday. The Belgian maestro floated in a cross inside the United penalty box which took out Rafael Varane as well as Lisandro Martinez in one swift move. The ball then reached its target with pinpoint accuracy and Haaland showcased his athleticism by guiding the lofted ball past De Gea with a stretched foot. The pass may have looked run of the mill but when you replay it in slow motion, you can see how de Bruyne knew exactly where to put the ball so that it both evaded the two centre backs and found its way to its intended target, which in this case was a flying Norwegian.

Another assist which saw de Bruyne take the ball inside the opposition penalty box but rather than try to shoot himself, plays a gorgeous ball to an onrushing Haaland, who looked like he had sprouted extra limbs inside the box. The ball bamboozled both the Sevilla defenders as well as the goalkeeper but found the boots of a mid-flight Haaland, resulting in a goal. These runs which the Norwegian takes, evading the offside trap, coupled with the accuracy of de Bruyne’s passes perfectly plays to City’s strength. They had been looking for a perfect CF who was going to attack the balls inside the penalty box and looks like Haaland is the missing piece of that jigsaw.

This might be one of the best goals this combination has scored till now. De Bruyne takes the ball, drifts to his right and plays a curler, while running, which goes over the goalie Martinez’s reach and finds Haaland near the back post at an unenviable angle. The gigantic Norwegian took flight, and just caressed the ball inside the Villa goal with his left foot, while hanging in midair. Any other striker there would probably have had a tough time to just reach the ball, but not Erling Haaland. He makes it look pretty easy.