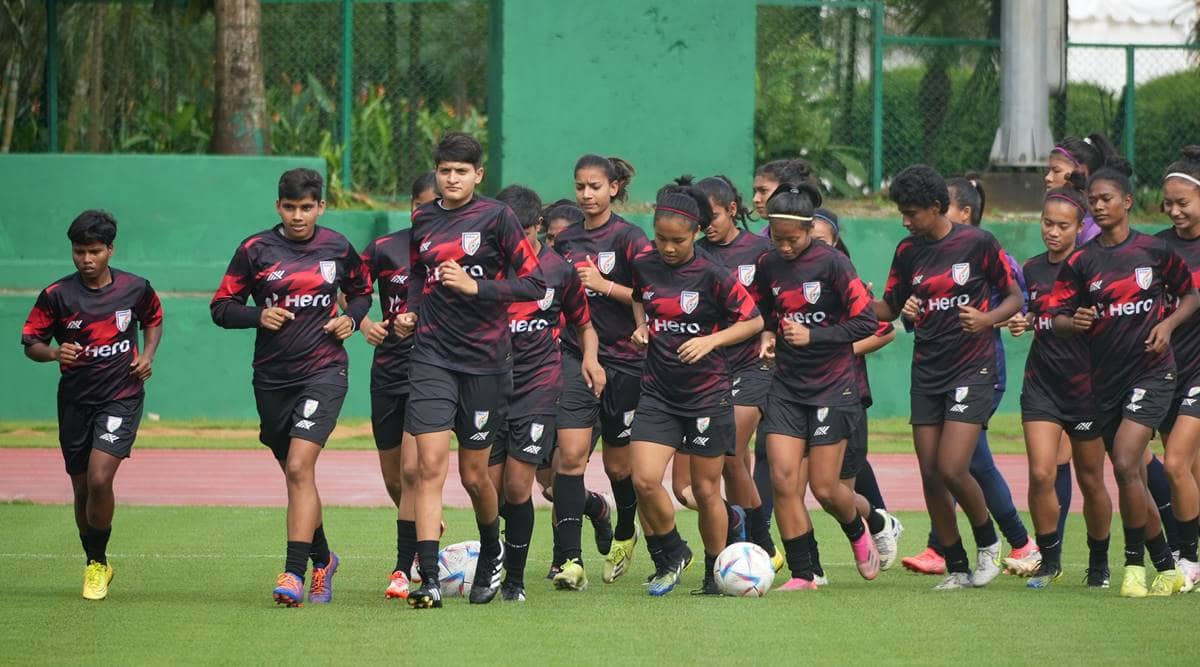 Just a little over five months ago, Kajol D’souza and Lavanya Upadhyay were playing local league football. The rest of their teammates, who were scouted during the pandemic, began training together just nine months ago. And most of these players have never played a competitive international match.

On Tuesday, this bunch of teenagers will take on the USA, considered the gold standard in women’s football, in the opening match of the FIFA U-17 Women’s World Cup in Bhubaneswar, a game that will also mark India’s debut in the youth competition.

From the pandemic to lack of structure to the unceremonious sacking of a coach, India’s road to the U-17 World Cup has been littered with unprecedented challenges.

The biggest of them was to assemble a team. With no proper women’s league or youth structure in place, it was difficult for scouts to put together the first Indian women’s team that would play in the competition. It meant they would have to rely on school tournaments to identify the best players in the country. However, with the pandemic-caused lockdown, most school tournaments were called off.

It forced the All India Football Federation (AIFF) to call for special trials in places like Manipur, Haryana, Tamil Nadu, and Mangalore. It was during these three-day trials that most of the players were chosen.

Despite the ‘less than ideal’ build-up, to use head coach Thomas Dennerby’s words, the players are ‘mentally and physically ready for the tournament’, the Swede declared on the eve of India’s match at the Kalinga Stadium.

Dennerby seemed content with the fact that he’s managed to have over ‘250 different sessions’ in total with the team after camps first in Jamshedpur and then in Bhubaneswar. “I hope we are prepared now. Both physically, with the fitness level, and also technical and tactical,” Dennerby said.

India must be prepared for baptism by fire against a USA team that’s inching to add a U-17 title to its glittering trophy cabinet that boasts of four senior Women’s World Cups and three U-20 World Cups. Their seriousness to win the competition can be seen by the fact that they sent a delegation a month ago to do a proper recce of the venues, its training sites, and the overall conditions.

After the match against the US, India will be up against fellow debutants Morocco on October 14. While Morocco have never previously appeared at a Women’s World Cup at any level, their senior team have qualified for the 2023 World Cup which will be held in Australia & New Zealand. Their qualification for the senior World Cup didn’t happen by chance. It’s a result of having a robust youth setup and a proper women’s football structure, which helped them to beat a fancied Ghana on penalties in the final round of the African qualifying tournament.

In their last group match, India face a very talented Brazil team, who are easily the title contenders. Brazil haven’t advanced past the quarterfinal stage of a U-17 World Cup but given the pedigree of their players, they can’t be ruled out.

Both USA and Brazil will be fighting for the top spot in the group meaning that big wins against India could ultimately be the difference. And that’s why India will need to be relentless, at least in defense.

It will be a Herculean task though. The team, in their exposure tours in Italy and Norway, didn’t win a match. On their trip to Spain, they lost 3-1 to Sweden before beating a local WSS Barcelona team 17-1.

While they’ve struggled on the field, the team has had off-field troubles too. Especially the case of former assistant coach Alex Ambrose who was ousted from the setup after he was accused of alleged misconduct with one of the players during an exposure trip. A POCSO (child abuse) case has been registered against him in Delhi though he has been granted anticipatory bail.

The incident, according to team officials, left the players shaken, especially since most of them were scouted by Ambrose.

While their off-field troubles will take a backseat, for now, it’s what they can do on the pitch that will count. And it’s not like they have nothing to offer. The preparatory camps and friendlies have shown that they are capable of springing a surprise.

Jharkhand’s Astam Oraon, who’s a left-back, has been named captain of the team. If their recent matches are any indication, India are very strong on the left flank and that’s thanks to Astam’s maturity and decisiveness. Another player to watch out for in this team is left-winger Neha, whose marauding runs and pin-point crosses have caught attention of club scouts. In the center of the field, there’s Nitu Linda who, at a little less than five feet, is the shortest player in the squad but makes up for that with her speed.

The core of the team — five of the starting XI, including Astam — hail from the interiors of Jharkhand, with their parents mostly peasants. They’ve had to sacrifice and struggle to reach here. It’s what’s made them mentally strong, says Astam. “There’s a little nervousness to play against such good teams, but we’ve become mentally strong. We don’t know whether we’ll win or lose but we will fight for each other. We’ve worked very hard for this,” she said in a recent Twitter post.

India know they’ll have to do better than their best to even come close to causing an upset. Five years ago, the men’s team despite being together for years and travelling all over the world lost all their matches of the U-17 World Cup.

The women haven’t even had half of that preparation. That, however, hasn’t affected their confidence and Dennerby is banking on home support. “We have the supporters on our side. We also will show that India have a really good team with a lot of young players that can perform on the highest level for this age group,” he said.
Best,