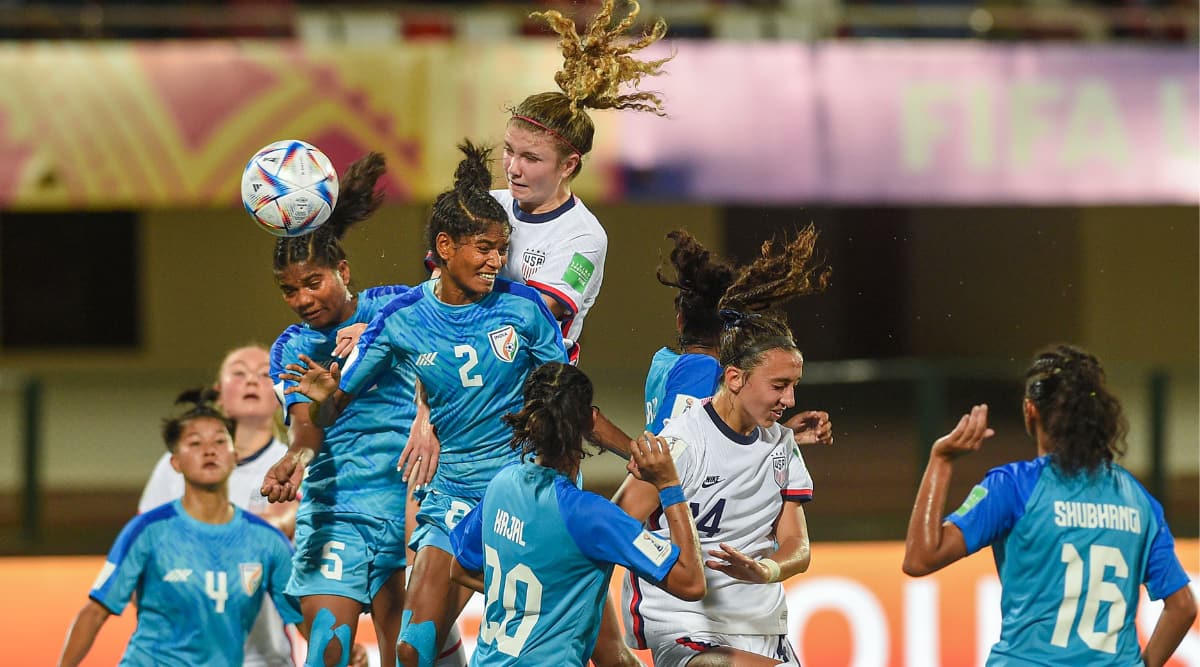 The result was expected. The manner and scoreline, not so much.

It took the USA just nine minutes to get on the scoresheet in their opening 2022 FIFA U-17 Women’s World Cup match against hosts India at the Kalinga Stadium in Bhubaneswar on Tuesday. And once they started, you had a feeling that it was going to be a long night for India.

USA produced an attacking masterclass to hand India an 8-0 drubbing, their biggest-ever win at an U-17 World Cup. It was also India’s worst-ever defeat at the U-17 level.

Playing against a nation that has won the senior World Cup four times and the U-20 World Cup thrice was never going to be easy for the Indian team especially since most of the players had never played a competitive international match before.

So while the outcome of the match was never in doubt, you’d expect this Indian team, after having had as many as 250 sessions under head coach Thomas Dennerby and exposure tours in Italy, Norway and Spain, to do something more than just try to clear the ball from their own box.

So underwhelming was India’s performance, that they didn’t manage a single shot at the USA goal in the entire match.

Perhaps it was the occasion that got to the Indian players. After all, they’re the first Indian women players to compete at a FIFA event. If it just was nerves, then it simply didn’t settle throughout the 90 minutes.

FULL TIME! Tonight’s action in Bhubaneswar draws to a close.

The USA players were physically better built and that’s definitely an advantage in set-pieces, but India have only themselves to blame for the way they defended corners. Their poorly defended corners resulted in three goals and more importantly, the first two. It was baffling the way they chose to defend them all through the match.

The first goal came from a poorly cleared corner, but could have been avoided had the Indian defenders not been a bit static.

USA captain Riley Jackson received the ball on the right flank, used her superb skill to go past a couple of defenders before lobbing the ball in the box with a deft touch. The Indian defenders, who were still maintaining their line after clearing the ball, left Melina Rebimbas open in the center. The American had to raise her foot a tad awkwardly to connect the ball and guide it to the back of the net.

USA quickly doubled their lead in the 15th minute and it was as easy as it could get. Riley was at it again, picking out Charlotte Kohler with a wonderful corner. Kohler towered over the Indian defenders and wasn’t really challenged.

Bhubaneswar: Melina Rebimbas (14) of USA celebrates with teammates after scoring the first goal against India during their match at FIFA U-17 Women’s World Cup 2022 at Kalinga Stadium, in Bhubaneswar, Oct. 11, Tuesday, 2022. (PTI Photo/Swapan Mahapatra)

In the first 20 minutes, India who had only 20% of the possession, weren’t really able to string even three passes together to threaten the USA defense. Neha was the lone striker and on the rare occasions she got the ball, there was nobody to back her up and it seemed a big ask of her to take on the ruthless USA defenders alone.

Any hopes of an Indian comeback were dashed in the 23rd minute with a basic footballing error.
Keen to take a quick goal kick, goalkeeper Anjali Munda played a short pass to Purnima Kumari, who didn’t anticipate the move. USA forward Onyeka Gamero had anticipated the move though and she quickly outmuscled Purnima before slotting it past Anjali to give her team a 3-0 lead.

Eight minutes later, Rebimbas doubled her tally with a superb shot from the top of the box after Riley’s initial shot was poorly cleared by Shubhangi Singh.

Eight goals for the @USYNT to begin their campaign! 🇺🇸

By half-time, the score was 5-0 and one can only guess what Dennerby’s half-time team talk would’ve been.

India, who made three substitutions at the break, came out with renewed vigour but that quickly fazed out in the 51st minute after Ella Emri found the top corner with a header from a corner.

Once USA scored their eighth goal in the 62nd minute — a stunning curler by Indian-origin Mia Bhuta from outside the box — they started to ease on the attacks and were content with passing the ball around, trying to conserve their energy. After all, they face a tough task in Brazil next. The South American giants had edged tournament debutants Morocco 1-0 in the earlier match of the day.

India face Morocco on Friday and will have a lot of work to do defensively to maintain a clean sheet, especially when it comes to set-pieces.