It has not been a straightforward year for Germany captain Alexandra Popp.

The Wolfsburg striker missed the majority of the 2021-22 season with a serious knee injury and returned for her club side just before the end of the domestic campaign.

But the 31-year-old forced her way into Germany’s Euro 2022 squad, and after initially starting on the bench, she was soon in the starting line-up and looking back to her clinical best. She scored six of Germany’s 13 goals en route to the final to tie with England’s Beth Mead for the Golden Boot, only missing out on the accolade because of assists.

Heartbreakingly, she had to pull out of the final against England minutes before kick-off because of injury, with her side eventually losing 2-1 at Wembley.

... playing in her first Euros after missing previous tournaments through injury

“The tournament was very emotional for me, but at the same time I had the feeling that this moment – being able to participate and seeing how the atmosphere inside the team is – all that made me feel free and inspired me to perform like that.

“It is a little bit crazy because I was injured for quite a long time. But the last few months showed how far I personally can go, and how far we can go as a team.

“I am proud that I could inspire so many people with that short moment during the Euros. The fact that I was able to sneak in [at Wolfsburg] at the end of the season, that I could show that I am back and that I could get ready for the Euros, was crucial for me.”

… surprising herself at the level she reached

“I heard a lot of quotes [from people] not having thought it would be possible for me to perform like that at this tournament. I personally didn’t know it either, I must confess.

“I didn’t know where I stood before the tournament, but I had ambitious plans and I knew how important I can be for the team – no matter if it’s on the pitch or off the pitch leading the team.

“That it turned out that way together with the team was magnificent and that’s why it makes me so proud that it worked out like that in the end – with our way of playing football, with me being able to show my qualities – because a lot of people had already written me off.”

… coming back from so many injuries

“It wasn’t that easy all the time, there were several situations and stages in which I thought, ‘I can’t do it any more. I don’t want it any more. Is it even worth it?’

“But the Euros really got me to go on – and the help of my friends and my family, obviously. I think without them I am not sure if I would have made it.”

… getting injured before the Euros final

“It was during the last practice session where I already had problems with my thigh. During the day of the match I didn’t have a good feeling and I wasn’t very optimistic that I could make it. In a way, I could have dealt with it during the game with all the adrenaline.

“But getting into some shooting I wouldn’t have had the slightest chance. The pain was so extreme in my thigh. So during the warm-up I went over to [her replacement] Lea Schuller and told her to get ready.

“The moment making the decision was extremely tough, but I knew that it wouldn’t help the team if I played in this condition, and it wouldn’t be helpful for myself as well.

“Such a final – particularly England v Germany – deserves players who are 100% fit. So, that’s why there was no other decision possible than not to play, and that’s how the beautiful story which lasted during the whole tournament ended all of a sudden.”

… retirement and playing at the World Cup next year

“The beautiful story about this World Cup is that I played my first with the under-17 national team also in New Zealand. So it would be a quite pretty story if the whole thing would end up there – ideally with the title.

“But, if I really will play this tournament, let’s see.

“During the Euros and before I did think about ending my international career after the tournament. But I have to say that this team – the national team as well as the team in Wolfsburg – is giving me such a good time at the moment.

“But I also say very honestly that I always go with my gut feeling deciding if I am playing another tournament or not. And that’s why it’s possible that in six months all of a sudden my gut feeling [could be] that it´s over.”

Former England defender Anita Asante: “When you see her on the pitch, she is an intimidating figure.

“She’s lethal in the air. I don’t know if many people really can understand how good she is in the air. Her aerial ability, the power, the leap that she has, and her ability to use her physicality – that’s one of her super strengths.” 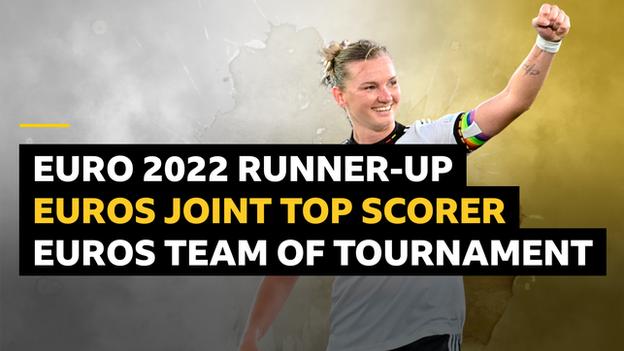