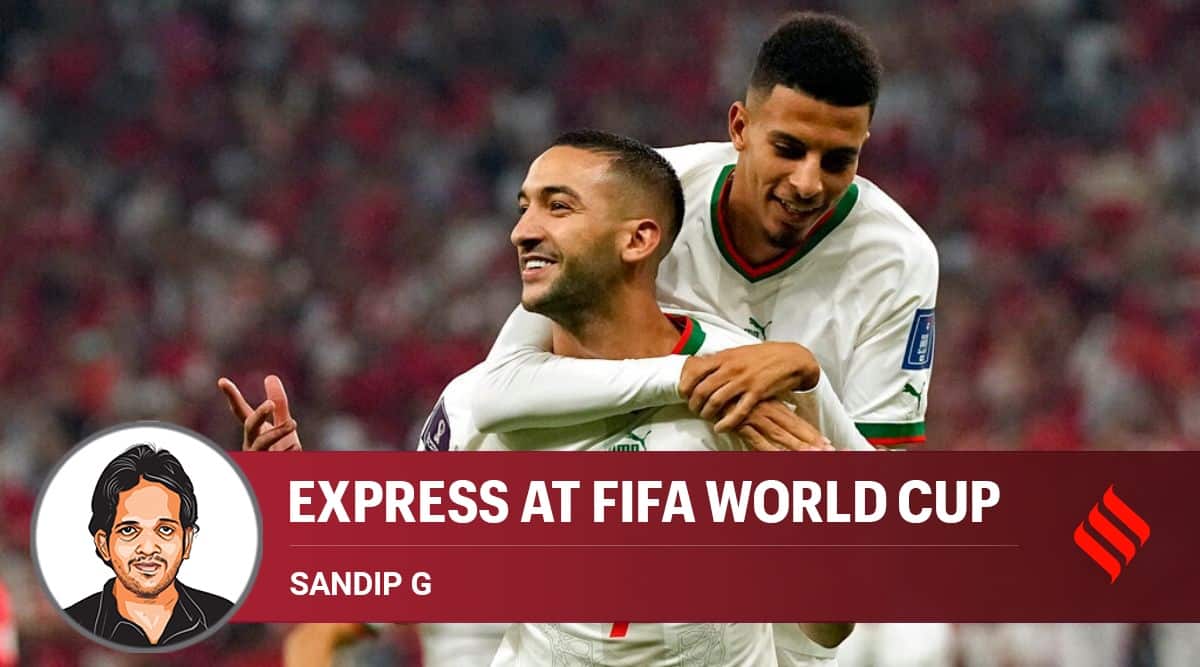 After the Canada game, Hakim Ziyech jumped over the advertisement board onto the edge of the fence where a large section of Moroccan fans were chanting his name.

He clambered onto the slim concrete fence, flung his shirt at a young fan, stretched his arms, and drew a heart with his hand. The delirious fans could have swarmed him but for the panicked guards, shouting at them. Ziyech, though, would hold his pose for a minute, for them to twist around and capture selfies. Some of the fans wanted to kiss him, some hug him, but he would soon climb down the fence to the relief of the guards. He then disappeared into the tunnel, brought some more of his shirts and hurled them into the stands. He basked in the glow of love from the stands.

In Rabat, the Moroccan capital, giant cutouts of Ziyech have been erected. Fans embedded his face on the Moroccan flags, a thousand jerseys of his were sold out, faces are painted with his face, he adores the windows of the cars and a football tragic even named his son Hakim. “The World Cup has made him a national hero,” says Malek Sulaiman, a Moroccan fan from Casablanca. “He has always been our favourite, and you know we even held a protest when he was dropped last year. We cursed the coach and the coach was soon sacked,” he says chuckling.

Malek was referring to Vahid Halihodzic, the Bosnian coach who had exiled Ziyech for 15 months for reporting late for training. He wanted an apology, but Ziyech would not relent, and swore he would never play for the country. But he changed his mind when Walid Regragui, Morocco’s first coach from their country, took over the charge. “That’s the best thing to have happened to our football, Hakim returning and Walid becoming the coach,” he says.

The sense of nationality is fierce, even though 14 of the 26 players in the squad were born and bred outside the country. So was Ziyech, born in a rough neighbourhood in Dronden, 70-odd kilometres northwest of Amsterdam. The first time he argued with a coach too was regarding his nationality. In the early days of his Ajax career, when he swept over everyone who cast his eyes on him with his passing range and imagination, Van Basten urged him to switch his nationality to Dutch. He refused, and eventually, their relationship strained. Van Basten claimed he is “impossibly talented but impossibly unmanageable too.” Ziyech would not hold back. “He is a legend, a great player, but a bad manager,” he said.

The run-ins and flare-ups with managers were to become a recurring theme of his career. Before Halohodzic, his predecessor Renard Herve, too, had axed him for disciplinary reasons, though the manager later admitted that he was impetuous in discarding. Reflecting on these spates of incidents, he would tell the Dutch newspaper De Telegraaf: “I speak my mind, I demand explanations, I want a reason. That’s why I am perhaps a difficult guy to work with, But that’s how I am.”
But he is not all rage and tantrums. There is a softer side. When he was with Ajax, a three-year-old girl asked him for his jersey. He gave it to her, but a man barged in claiming he was her dad and took the jersey. Later, he realised he was lying. But Ziyech found out the girl’s whereabouts, invited her for a game at the Ajax arena and gifted her an unused football. “He is a misunderstood footballer,” Morocco’s coach Walid Regragui would say.

In Regragui, he has a manager who understands him, loves and indulges him. You could spot that in warm-ups before practice. Walid is always beside, having a chat, or sharing a joke. After the Canada game, he was asked how he has managed to harness the best out of Ziyech. He replied: “I was expecting the question earlier. To me, he’s incredible. A lot of people talk about him as a difficult guy to manage but what I see is that, when you give him love and confidence, he will die for you. It is what I give him and he returns my confidence.” Then, as an afterthought, he added: “To understand him, you need to know a bit more about him.”

Growing up in a crime-ridden suburb

You need to travel back in time to the dark alleys of Dronden, a crime-ridden suburb of Amsterdam where he lived in a two-room apartment with seven siblings and his parents. He was attached to his father, who was French. But when he was just 10, he died after a long battle with multiple sclerosis. “That disease tore him apart. He could do less and less. He couldn’t walk, eat, talk… And it ended in the worst possible way. I remember the night he died. I was a ten-year-old boy. I didn’t go back to school anymore. I didn’t care about football either. I was completely gone. I gave everything up,” Ziyech narrated his story to Dutch newspaper ‘De Volskrant’.

He slipped into depression and sought refuge in alcohol when he was barely in his teens. His life was going astray when former footballer Aziz Doukifar stumbled on him when he was playing on the streets. He recounted the journey to De Telegraaf: “Hakim went completely off the rails. He drank and smoked and he also took drugs. I helped him as best I could to get him off this bad path.”

In Doukifar, he found the father figure that he always wanted. He shed his habits and devoted himself to football, where he left an impression on everyone who watched him. He combines a ballet artiste’s nifty footwork and the smarts of a street footballer. He sees the channels and paths his opponents don’t. The traffic of a goalmouth melee does not suffocate him. Invariably, he finds an outlet, a passing line, a goal-ward path. He makes space for himself, when there is none. He glides through the maze of legs and body, like a ghost. In Ajax, they used to call him the phantom. He is often risk-prone but cut out his risk-taking instincts, his game falls apart.

Initially reclusive, his talents were soon to blossom. “I saw that he was afraid to show himself on the pitch. I let him play several tournaments and then I just watched him grow up. It worked out, and with a bit of luck, Hakim totally blossomed,” he added.

The coach-mentor would use his contacts to get him enrolled at the youth academy of Reaal Dronten before he switched to ASV Dronten. In 2007, Eredevise club Heerenveen’s scouts noticed him and took him to their academy. Five years later, he made his first foray into professional football, when he turned up for Heerenveen. From then on, his journey is well storied—to FC Twente, where again he fell out with senior players, to Ajax, where his fame vaulted and everyone wanted his signature, and then Chelsea, where the continuous churn of coaches stymied his career, reduced to cameo act.

His career, for club and country, seemed struck, before Wahid took over as coach and breathed new light and life into him, which ignited his country to its first knockout appearance in a World Cup this century. In return, he is basking in the glow of the love his countrymen are showering on him.