After an opening weekend full of surprises, what can we look ahead to in the second round of Women’s Super League fixtures this weekend?

Will we see a new WSL attendance record at the north London derby? Who will come out on top between Chelsea and Manchester City, after both teams suffered shock defeats? Can the momentum from the Euros continue in the WSL?

Here’s five things to look out for this weekend.

As if a north London derby wasn’t exciting enough, Saturday’s game looks set to break the WSL attendance record as Arsenal reported on Thursday they had sold 50,000 tickets for the match at Emirates Stadium.

“It shows that the interest there, it is for real and that the investment that we as a team and the club have done, but also all the past generations of past teams before us have done, to put us on to this stage here.” 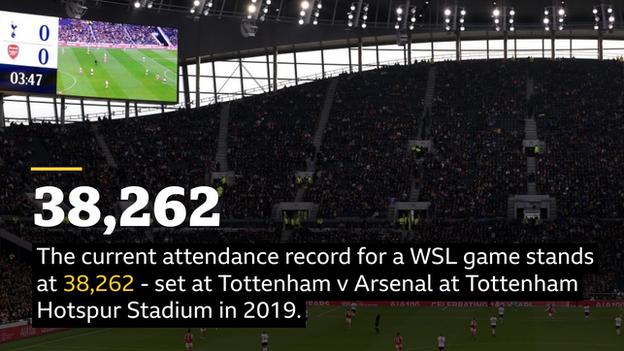 Tottenham boss Rehanne Skinner, who enjoyed a 2-1 win against Leicester in the opening round of fixtures, said it was an “exciting prospect” to break the current record which has “stood for too long”.

“It’s something the players will relish,” Skinner said. “It’s an opportunity to play in front of a volume of fans which some won’t have done before – unless they have been in FA Cup finals but even then it’s lower.”

Can Chelsea and Man City bounce back?

Defeats for reigning champions Chelsea and Manchester City, who finished third in the league last season, were results that surprised many last weekend.

In a see-saw encounter at Villa Park, City came from two goals down and even led for a period before Aston Villa doubled their score and clinched a 4-3 win.

Looking ahead to what is normally a top-of-the-table meeting, City manager Gareth Taylor said: “We know it’s going to be a really tough game. It’s their first home game but we’re looking forward to the challenge.

“We’ll hopefully show a better version of ourselves without the ball this time.”

Chelsea boss Emma Hayes is also confident her side can bounce back after a “good week of training”.

“There are so many leaders in the dressing room who are accountable and mature, and the one thing I have seen is an improvement in the team’s response to things collectively,” Hayes said.

“City have quality throughout and they were improving their performances with every game they played against us last year. That will give them confidence.” 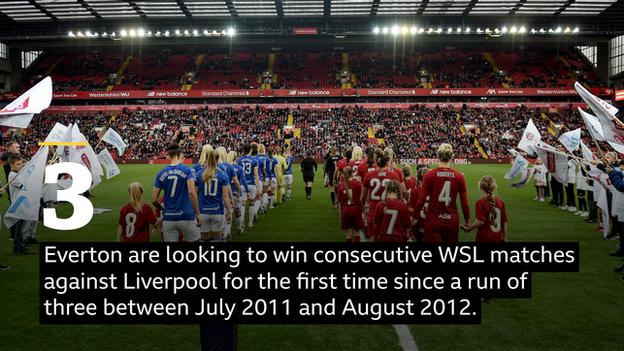 The north London derby isn’t the only derby this weekend as Liverpool prepare take on Merseyside rivals Everton in the league for the first time since 2019, with Anfield hosting the meeting.

Usually a feisty encounter, Everton’s new manager and some of Liverpool’s new signings have been getting to grips with what derby day means for Reds and Blues supporters across Liverpool.

Toffees boss Brian Sorenson said a good result from his side this weekend would help to build a stronger relationship with the fans.

“Those are special games throughout the season you look forward to playing. In Denmark I watched those games because of the intensity and how much it meant,” Sorenson said.

Meanwhile, Liverpool’s Gilly Flaherty, who arrived from West Ham this summer, said: “I got in a cab the other day and for the whole 25 minutes the driver was telling me about the derby and how massive it is. He was educating me so I came out prepped for the game.”

Following an electric start to the WSL last weekend, a number of managers feel the hype of England’s success at Euro 2022 this summer is carrying through into the domestic season.

With record crowds at Villa Park and Prenton Park for women’s games in the first round, and with the north London derby expected to break the attendance record this weekend, WSL bosses are hoping the momentum continues.

Leicester manager Lydia Bedford said the atmosphere at King Power Stadium last Sunday was “on another level”, while Villa boss Carla Ward said the club had seen its biggest uplift in ticket sales after their thrilling 4-3 victory against City.

“It’s important that we keep riding that wave and keep getting people back and bums on seats,” Ward said.

Manchester United manager Marc Skinner added: “As a team on the field, we have to keep putting a product on the pitch that our fans want to keep coming back to watch.”

Can new signings continue to shine?

There were plenty of new summer signings on display on the opening weekend, and some wasted little time in making their mark.

One of those was Rachel Daly, one of England’s Euro 2022 winners, who surprised many by showing she was a natural striker having played as a left-back for the Lionesses.

“She’s always been a forward, let’s not dress it up. You know, she went to the Euros and she filled in at left-back. She was sensational,” Ward said of the 30-year-old, who scored twice on her Villa debut after moving from the NWSL.

Ward was also impressed with Kirsty Hanson, who joined from Manchester United: “My word, I’ve never seen someone carry a ball with her pace. She’s an unbelievable talent.”

And top of the goalscoring charts, perhaps unexpectedly, is centre-back Maya le Tissier. The 20-year-old, who joined Manchester United from Brighton this summer, netted two headers in their 4-0 win over Reading.