The Women’s Super League is back after a League Cup and international break, but what can we expect to see in this weekend’s fixtures?

Can Aston Villa continue their unbeaten start? How will Chelsea fare without manager Emma Hayes? Can Manchester City finally kickstart their season against Leicester?

Here’s five things to look out for this weekend.

Perhaps it is slightly surprising to see Aston Villa sitting ahead of WSL champions Chelsea and ‘top-three’ side Manchester City given they finished ninth in the league last season.

After a 4-3 win against City in their opening match and a 2-0 victory over Leicester the following weekend, Villa continued their unbeaten run in all competitions with a penalty shootout win against Manchester United in the League Cup prior to the international break.

Carla Ward was rewarded with the WSL’s manager of the month award for September while Rachel Daly, who has scored three times and is the league’s joint top goalscorer, received the player’s accolade.

Villa take on West Ham on Sunday in what Ward called the “biggest game of the season so far”.

“It’s a team that replicates what [manager] Paul Konchesky is about as a player,” Ward said.

“They are front-footed and aggressive. They have a lot of quality and experience in that group.”

Chelsea will be without manager Emma Hayes for Sunday’s game against Everton after she announced on Thursday that she would be taking some time away as she recovers from an emergency hysterectomy.

The 45-year-old revealed she had surgery last week as part of her “ongoing battle with endometriosis”.

Assistant manager Denise Reddy is taking charge of the on-pitch decisions, but general manager Paul Green, who is covering media duties, confirmed Hayes would be “heavily involved” in upcoming fixtures.

“She’ll be home watching all the training online. She’ll be linked into the bench on the match days, as long as she’s well enough to do that,” Green said.

So what can we expect from Reddy?

The American, who has been a head coach in Denmark and the United States, has been assistant manager at Chelsea since 2020 and worked with Hayes before at National Women’s Soccer League (NWSL) side Chicago Red Stars from 2008 to 2010.

“Denise is very detailed in her coaching, probably second to none in the way that she speaks to players individually and really goes through the individual analysis of players,” Green said.

Can Man City kickstart their season? 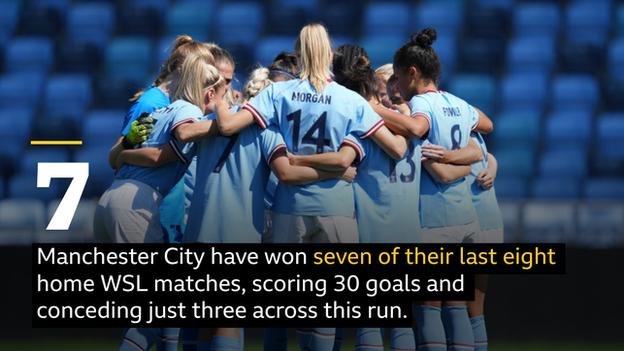 Manchester City, who finished third in the WSL last season, are currently third from bottom and are awaiting their first points of the season, following defeats to Chelsea and Aston Villa.

City boss Gareth Taylor is “fairly confident” they can get that first victory this weekend against Leicester, especially on home soil.

“It’s nice to be home. Obviously, we had two tough away games so far so it’s nice to get back in front of our own supporters,” Taylor said.

“It gives you that kind of psychological edge, familiarity, majority of the time more supporters than the away supporters.”

However, Lydia Bedford’s side are also hoping to pick up their first win of the season after they were denied a draw at Everton by a late own goal.

“[City] will see this it as an opportunity to take points but at the same time, we’re not here to roll over and get our bellies tickled,” the Leicester manager said.

This weekends’ fixtures are the first league games to be played since an independent investigation found abuse “had become systemic” in the United States’ top-flight National Women’s Soccer League (NWSL).

In England’s international friendly against the United States last week, players wore teal armbands, Wembley’s arch was lit in teal and both squads gathered in the middle before kick-off, arm-in-arm in front of a banner saying ‘Protect The Players’.

Bedford confirmed that Leicester had been in communication with Manchester City over showing solidarity with players in the NWSL this weekend and said it was likely to be similar to the support showed by the Lionesses.

“We need to be in a position where players feel safe,” Bedford added.

“It’s heart-breaking to see so many professional women have been affected and let down by a failed system that’s not supported them through their careers,” Rehanne Skinner added.

English defender Maya Le Tissier has made a superb start to life at Manchester United since joining from Brighton this summer, having started and kept clean sheets in both of United’s first two WSL games. She also scored two goals in their opening 4-0 win over Reading.

Le Tissier, who broke the record for the most appearances by a teenager in the WSL last season, has been praised by both sets of managers ahead of this weekend’s game as Brighton travel to Leigh Sports Village.

“She’s so mature for someone so young but the best thing about her, even when you see her interviews, she’s driven, focused but good fun,” Marc Skinner said.

“[Brighton] have had a massive part in what Maya is so we’re at the minute reaping the rewards of that, and our job is to help continue that growth with her as well.”

Brighton boss Hope Powell added: “Maya is such a lovely kid. I’ve messaged her since she’s gone to United and said ‘well done’ after she scored.

“I just hope she has a terrible game on Sunday!”